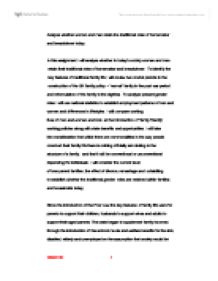 Analyse whether women and men retain the traditional roles of homemaker and breadwinner today. In this assignment I will analyse whether in today's society women and men retain their traditional roles of homemaker and breadwinner. To identify the key features of traditional family life I will review two crucial periods in the construction of the UK family policy - 'normal' family in the post war period and reformulation of the family in the eighties. To analyse present gender roles I will use national statistics to establish employment patterns of men and women and differences in lifestyles. I will compare working lives of men and women and look at the introduction of 'family friendly' working policies along with state benefits and opportunities. I will take into consideration that whilst there are commonalities in the way people construct their family life there is nothing officially set relating to the structure of a family, and that it will be conventional or unconventional depending it's individuals. I will consider the current level of lone parent families, the effect of divorce, remarriage and cohabiting to establish whether the traditional gender roles are retained within families and households today. Since the introduction of the Poor Law the key features of family life were for parents to support their children, husbands to support wives and adults to support their aged parents. The state began to supplement family incomes through the introduction of free school meals and welfare benefits for the sick, disabled, elderly and unemployed on the assumption that society would be made up of three generations. ...read more.

What was to happen to domestic family life was at the centre of change and from the 1970's to the present day generational changes are apparent. Family life is constantly developing and changes occur all the time, since the 1970's there have been significant changes to the key aspects of family and household experiences. One of the changes particularly in Britain has been the increase of divorce rates, as the rate of divorce rises it is becoming the norm and according to the Office for National Statistics: July 2005; in 2003 153,500 children under the age of sixteen were affected by their parents divorcing in England and Wales. The level of divorce has contributed to other changes in family demography in particular the increasing number of lone parent households. In 2004 one in four children lived in a lone parent family (Office for National Statistics : July 2005). It must be noted that it is not just marital breakdown that generates lone parent families as some parents have never married. The statistics highlight that lone parenthood is largely concerned with women as it was recorded in 2004 that 22% of all parents were headed by single women. The level of women who are not and never have married reflects a change in social expectations. In this generation it is acceptable to have children out of wedlock whereas in previous generations unmarried pregnancies generally led to marriage prior to birth. A high proportion of unmarried mothers are cohabiting with the child's father at the time of birth. ...read more.

The figures show that more men are employed on a full time basis than women therefore it could be said that a higher number of women are working part time in order to create a balance between work and the role of homemaker. I have identified that contemporary families are not made up solely of a married couple and their children and that the traditional concept of a family excluded lone parent families, same sex couples, female breadwinners and step families. I found that the way a family operates reflects the different social and economic positions of each individual within it and that the external factors and issues that influence family life are extensive. The change in employment structure altered the division of labour and financial responsibility within the family along with demands on family support made by health and education authorities all have had an impact on the domestic and family characteristics and relationships. Overall I have found that each family will develop over time as circumstances change and however conventional or unconventional the family is, it will alter with age and dependency of children. Less predictable factors could also influence the family roles such as divorce or unemployment. The ideologies of parenting and childhood have dramatically changed over the last 30 years and there appears to be an opportunity now for parents to balance work and domestic duties with the assistance of 'family friendly' policies. However, statistics do show that on average men spend more time out at work than women and on average women spend more time doing domestic duties than men do. ...read more.