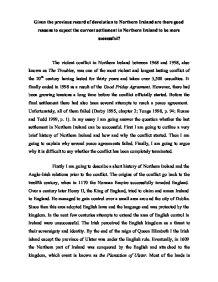 15-16, Darby 1995, chapter 2). There were several reasons for the failure of the Sunningdale Agreement. The need for Irish unity was constantly emphasised, which built up Protestants' fears that they were a staging post to a united Ireland. It can be argued that the agreement might have had Unionist support if the 'Irish Dimension' had been de-emphasised (Cunningham 2001, pp. 15-16). The Unionist position was still strong at that time and they could not accept not having the majority. They were also absolutely against any influence of the Republic of Ireland on solving the problem. Moreover, the conflict was seen as an internal issue of the United Kingdom and had no international involvement (Ruane and Todd 1999, pp. 1-2). Another attempt to reach a political accord was the Anglo-Irish Agreement (AIA), which was signed on November 15, 1985 by the British and Irish Prime Ministers. The aim of the agreement was to promote peace and reconciliation in Northern Ireland and better relations between Ireland and the United Kingdom. One of the terms of the AIA stated that the status of Northern Ireland could be changed (i.e. whether it was to remain in the United Kingdom or become part of the Republic) and how it could be done. The governments of both Britain and Ireland also committed to promote a devolved government of Northern Ireland. The agreement was also supposed to protect human rights and prevent discrimination (O'Leary and McGarry 1996, pp. ...read more.

In 1973 the Sunningdale Agreement was signed introducing power sharing between Protestants and Catholics. However, it did not have Unionist support and as a result it failed only after a few months. The next attempt took place in 1985 when the Anglo-Irish Agreement was signed. Even though it did not successfully address the issues or resolve the conflict, it was the first time the Republic of Ireland had been given an opportunity to give their voice in the Northern Irish problem. Eight years later Ireland and Britain signed the Downing Street Declaration, which addressed a few important issues and for the first time Sinn Fein had been involved in the talks. Finally, in 1998 the Belfast Agreement was signed, which helped put an end to the conflict. There are some reasons to believe that the conflict might have been ended for ever. Most of the paramilitary groups have ceased fire; there is more trust and understanding in relations between Northern Ireland and both the Republic and the United Kingdom; many Protestants supported the agreement; there is more religious tolerance; and since 1970s the conflict was no longer perceived as an internal problem of Britain. However, it can also be argued that there are many issues that can result in a return of the conflict. There are still some paramilitary organisations that are ready to fight; in some time Protestants might no longer support the agreement; the demographics are constantly changing, particularly there is a growth of the Catholic minority. Therefore it is hard to predict whether the conflict has been completely terminated or whether it can return in the future. ...read more.