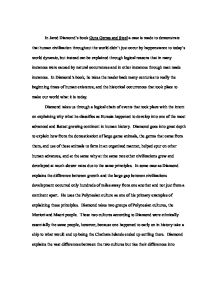 In Jared Diamond's book Guns Germs and Steel a case is made to demonstrate that human civilization throughout the world didn't just occur by happenstance to today's world dynamic, but instead can be explained through logical reasons that in many instances were caused by natural occurrences and in other instances through man made instances. In Diamond's book, he takes the reader back many centuries to really the beginning times of human existence, and the historical occurrences that took place to make our world what it is today. Diamond takes us through a logical chain of events that took place with the intent on explaining why what he classifies as Eurasia happened to develop into one of the most advanced and fastest growing continent in human history. Diamond goes into great depth to explain how from the domestication of large game animals, the germs that came from them, and use of these animals to farm in an organized manner, helped spur on other human advances, and at the same why at the same rate other civilizations grew and developed at much slower rates due to the same principles. ...read more.

To contrast the Maori people from the Moriori people, Diamond explains how the island that they settled on had much more large game then the island that the Moriori people had on their island. As a result the Mapri people were able to use the large game to cultivate agriculture, and develop tools that would better aid in the cultivation if crops. As a result of this factor, the Maori people had been subject to germs which their bodies could develop anti-bodies towards. As a product of the large cultivation of crops and large game animals, the Maroi people were far more advanced then their hunter gatherer brothers in the Chatham Islands. This fact resulted in a governmental system for the Maori people, thus giving them a central leader who could control the events that took place in the society. All of this resulting in a warrior like sociatey that was far more developed through cultivation techniques, invincible to certain germs that their brethren had never come into contact with, and tools used for war that again their brethren have never developed much less ever had the need to do so. ...read more.

Across the pond in South America, the Inca civilization again much like the Moriori people had the misfortune of place and timing. The Inca had very little domesticated large game and as a result although relatively technically advanced in certain areas never had the means to either sustain themselves or develop as fast as their Eurasian counterparts. Ultimately, all of these factors would tell the story of why the Inca fell under the hands of a well under strength enemy. When the Spanish came to South America they brought with them germs and diseases that they themselves where immune to but where the Inca had never been in contact with before thus killing off or decommissioning a large part of their population. Additionally, the Spanish brought with them weapons that were far more technically advanced and a supply of resources that could sustain their small population and mission. Diamond goes into great depth in his study of world facts and history to tell a small part of the human historical story. However, the analysis of science and historical facts offer a well thought out and understandable explanation of possibly why human civilizations throughout the world have developed they way they have over thousands of years. ...read more.