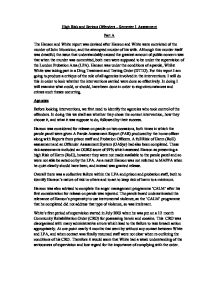 High Risk and Serious Offenders - Semester 1 Assessment Part A The Hanson and White report was devised after Hanson and White were convicted of the murder of John Monckton, and the attempted murder of his wife. Although this murder itself was dreadful, the issue that understandably caused the greatest amount of public concern was that when the murder was committed, both men were supposed to be under the supervision of the London Probation Area (LPA). Hanson was under the conditions of a parole, Whilst White was taking part in a Drug Treatment and Testing Order (DTTO). For this report I am going to produce a critique of the role of all agencies involved in the interventions. I will do this in order to look whether the interventions carried were done so effectively. In doing I will examine what could, or should, have been done in order to stop circumstances and crimes such theses occurring. Agencies Before looking interventions, we first need to identify the agencies who took control of the offenders. In doing this we shall see whether they chose the correct intervention, how they choose it, and what it was suppose to do, followed by their success. ...read more.

On day of the Monkton's murder, white told Minster Road that he had been stabbed in hand. This should have prompted the supervising officer to look into White's lifestyle and risk of harm; instead this incident seemed to be simply ignored. Due to continued failure to attend Munster Road discharged White, and case records showed that a letter was eventually sent to White for breach of the DTTO. What also is worrying about the interventions in place for both Hanson and White is the fact there was even some confusion about the nature of the order made by the court. Staff from all agencies were unclear of their own responsibilities which also led to the mismanagement of the offenders. It therefore comes as no surprise that The Evening Standard news reports that 'Four probation officers were suspended from their jobs' after a damning report blamed a catalogue of serious failures, such as the inadequate level of staff supervision provided by the senior probation officers, for the murder of John Monckton. Alternative interventions and recommendations It is obvious from that both Hanson and White were not dealt with correctly and either wrong interventions were in place or were simply not carried out effectively. ...read more.

I could also have made the slides more interesting for the audience as they were very plain. I will take all of these points into account next time I have to create and present a presentation in order to make it better. Overall I really enjoyed the experience and enjoyed being part of a group as it gave me a lot of support and helped me a lot with my confidence, I overcame my nervous and in future I believe I will have a lot more confidence when presenting to a class. 209 words Reference Martin Bentham (2006). Probation officers suspended over Monckton killer blunders; Failures left violent man free to attack financier. [Online] High Beam Research, The Evening Standard (London, England). Last accessed 16 December 2009 at : http://www.highbeam.com/doc/1G1-142646032.html HM Inspectorate of Probation (2006) 'An independent review of a serious further offence case; Damien Hanson and Elliot White'. Last accessed 16 December 2009. HM Inspectorate of Probation (2006). An Independent Review of a Serious Further Offence Case: Anthony Rice. London HMI Probation. Last accessed 15 December 2009 Alan Travis (2006). Offenders' anger control classes help make some more dangerous. [Online]. The Guardian. Last accessed 16 December 2009 at http://www.guardian.co.uk/uk/2006/apr/24/ukcrime.prisonsandprobation1 ?? ?? ?? ?? ...read more.