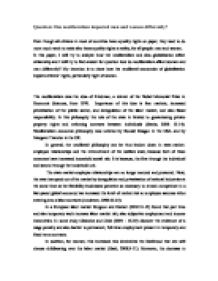 Question: Has neoliberalism impacted men and women differently? Even though all citizens in most of countries have equality rights on paper, they need to do more much work to make also these equality rights a reality, for all people: men and women. In this paper, I will try to analyze how the neoliberalism and also globalization affect citizenship and I will try to find answer for question how do neoliberalism affect women and men differently? My intention is to show how the neoliberal economics of globalization impairs citizens' rights, particularly right of women. The neoliberalism was the idea of Friedman, a winner of the Nobel Memorial Prize in Economic Sciences, from 1976. Importance of this idea is free markets, increased privatization of the public sector, and deregulation of the labor market, and also fiscal responsibility. In this philosophy the role of the state is limited to guaranteeing private property rights and enforcing contracts between individuals (Starke, 2008: 12-14). Neoliberalism economic philosophy was ushered by Ronald Reagan in the USA and by Margaret Thatcher in the UK. In general, the neoliberal philosophy can be thus broken down in state-market-employee relationships and the retrenchment of the welfare state, because both of these outcomes have increased household social risk. It is because, the first through the individual and second through the household unit. The state-market-employee relationships are no longer secured and protected. Now, the state has opted out of the market by deregulation and privatization of national industries at the same time as the flexibility businesses perceive as necessary to remain competitive in a fast-paced global economy has increased the level of market risk an employee assumes when entering into a labor contracts (Andersen, 1999:33-35). In a European labor market Burgoon and Dekker (2010:11-15) found that part time and also temporary work increase labor market risk, also subjective employment and income insecurities. In some study Giesecke and Grob (2004 : 16-19) ...read more.

It is probable that this inherently liberal blindness to difference is even greater under neoliberalism. Feminine qualities are subordinated as the market values and pays for traditionally male (public) work while it expects citizens (mostly women) to do the private sphere work, such as caregiving, always for free (Bakker, 1996:18-19). This position therefore provides additional harm to women's right to social security. The feminization of labor also ensures that women's work is more often part time, low paying, and with few benefits. While some women may not feel any effects of market citizenship, "women" are not a homogenous group and particular women are in a much worse situation. For case in point, women are overrepresented among single parents and poor seniors and there is a growing gap between classes of women. Bakker (1996: 8-11) also explains that one should not believe that gender is the only important factor in globalization but that it is a vital part of an affected "matrix of identities". More usually, though, recent reforms in education, health care, social assistance, workfare, and privatization are all cited for being disproportionately harmful to women. For example, Brodie (1997: 238) explains how single mothers are explicitly targeted for losing welfare benefits. Women are more likely to accept part time or casual employment because they are doing the "second shift" by working in both the private and public spheres (Hochschild 2000: 123-128). These combined factors also increase the psychological pressures on women. To compound these problems, women's domestic care-giving roles are further increased by reductions in state services. One of the greatest factors to be influenced by the change in social citizenship rights is social reproduction. This relates to the reproduction of the species, of the labor force, and of provisioning and caring needs (Bakker and Gill 2003: 32-34). Because of, the biological fact that only women can give birth and the patriarchal social tradition that in the public/private division of labor women carry out the majority of care-giving, the economic transformations in social reproduction have greatly affected women and their status as citizens. ...read more.

Also, people cherished civil rights have been granted to powerful corporations who will use them to further undermine citizens and the state. The citizens hit hardest by these effects are those who do not conform to the new citizenship model of the identity less consumer and customer. The new definition of neoliberal citizenship particularly hurts women citizens, although the heterogeneity of countries population shows that different women are affected differently. In conclusion I can say that women's citizenship is adversely affected by neoliberal globalization, especially their social rights, the most vital rights for vulnerable women. The burdens of the second shift and social reproduction have increased while participation through women's organizations has become less promising. Even though globalization does offer some new tools such as enhanced communication, this alone is not enough to restore protection of citizenship rights. The role of women has changed dramatically over the past fourteen years. Women no longer can be classified as "stay at home moms" or "business professionals. As an alternative women are faced with juggling both titles. In 1975 in USA and UK about 48 per cent of women with children under the age of 18 worked outside the home. By 2008, this number had risen to 73% (Van Dyke, 2009: 32-36). Moreover, the equal rights and opportunities has become a necessity for maintaining a middle class lifestyle. According to Gibbs, there are now about 3.4 million married couples in which the wife is the sole earner. That is 2.6 million more than in 1972 (Gibbs et al. 2009:29-32). It is consequently unsurprising that the changing role of women in the labor market would impact the the family unit as well. Sources: 1. Bakker, I. (1996) "Introduction: The Gendered Foundations of Restructuring Canada." In I. Bakker (ed.). Rethinking Restructuring: Gender and Change in Canada. Toronto: University of Toronto Press 2. Bakker, I. & S. Gill. (2003) Power, Production and Social Reproduction. New York: Palgrave MacMillan 3. Brodie, J. (1997) "MesoDiscourses, State Forms and the Gendering of LiberalDemocratic Citizenship." Citizenship Studies 1 (2) 4. Burgoon, Brian and Fabian Dekker. (2010). ...read more.