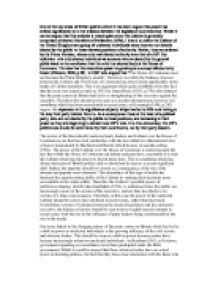 Has power in Britain shifted significantly into the hands of unelected individuals in recent years?

One of the key areas of British politics where it has been argued that power has shifted significantly is in the relations between the legislature and executive. Whilst it can be argued that this analysis is meaningless since the Cabinet is generally comprised of elected Members of Parliament (MPs), I intend to define the Cabinet of the United Kingdom as a group of unelected individuals since they are not directly elected by the public to these elevated positions of authority. Rather, they are selected by the Prime Minister, whose only real elected authority is as that of a MP. My definition of a truly elected individual as someone who is elected by the general public leads to the conclusion that the only true elected body is the House of Commons. The idea that the executives power is growing is a concept alluded to by Foster (Flinders, 2002, p.28) in 1997 who argued that "The House of Commons must not become the Prime Minister's poodle". However, in reality the balance of power between the Cabinet and The House of Commons has always been significantly in the hands of Cabinet members. ...read more.

Whilst it can be argued these kind of checking measures have long been prominent in Britain with the House of Lords, the creation of the Supreme Court has taken this to a new level. This independence of the judiciary is particularly dangerous as Locke argues (Weir & Beetham, 1999, p.447 ) "it may be too great a temptation to human frailty...for the same persons who have the power of making laws to have also in their hands the power to execute them". As has been shown, in the case of the judiciary, power has dangerously shifted towards unelected individuals in recent years. Whilst the role of courts within the United Kingdom have been shown to shift power away from elected individuals in recent years, this is an issue which seems almost insignificant when assessed alongside the powers that the courts of the European Union have. The creation of the European Communities Act in 1972 is one example of a significant shift in power into the hands of unelected individuals. By giving precedence to European Union law over the law of the United Kingdom this act has taken power from elected individuals in the United Kingdom not least because it means that European Union regulations and laws instantly apply to the United Kingdom without the permission of Parliament. ...read more.

The power the media holds is in forcing those elected in government to act in a certain way by treating them as prisoners accountable to the interest of the public. As Foucault (Owen, 1994, p.177) comments, "This optical relation makes the exercise of power automatic in that the prisoner, because he cannot be sure as to whether he is being observed, becomes his own supervisor, he becomes the principle of his own subjection". It could be seen that the media has long been a part of British society and so its political influence should not be seen as a significant recent shift in unelected power. However, it is better viewed in light of the medias expanding breadth and depth of involvement in politics in recent years through the age of the internet which defines the rising power of the unelected media. This power of the media should be seen as a significant shift towards power being held by unelected individuals due to the fact that, as Curran and Seaton argue (2003 p.392) "the media...absorbs over thirty hours a week in the average person's life" which is in contrast to the past where more political information was government controlled. ...read more.