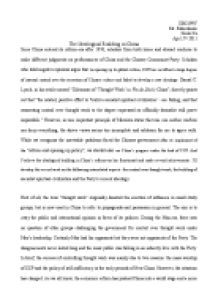 Has the effort of the Chinese central party-state to reassert control over thought work and to build a socialist spiritual civilization failed?

ï»¿XBC199Y Mr. Falkenheim Xinlu Xu Apr.15th 2011 The Ideological Building in China Since China entered its reform-era after 1976, scholars from both home and abroad continue to make different judgments on performances of China and the Chinese Communist Party. Scholars who hold negative opinions argue that in opening up to global culture, CCP has sacrificed a large degree of internal control over the recreation of Chinese culture and failed to develop a new ideology. Daniel C. Lynch, in his article named “Dilemmas of ‘Thought Work’ in Fin-de-Siècle China”, directly points out that “the related, positive effort to ‘build a socialist spiritual civilization’ - are failing; and that reasserting control over thought work to the degree expressed as officially desirable will prove impossible.” However, as one important principle of Marxism states that one can neither confirm nor deny everything, the above views seems too incomplete and arbitrary for me to agree with. While we recognize the inevitable problems faced the Chinese government after its implement of the “reform and opening-up policy”, we should also see China’s progress under the lead of CCP. And I believe the ideological building in China’s reform-era has functioned and made several achievements. I’ll develop this essay based on the following interrelated aspects: the control over thought work, the building of socialist spiritual civilization and the Party’s current ideology. ...read more.

They indicate that Chinese people are suffering moral decay after Deng?s economic reform and the moral level in China will never return to that of the Mao-era. Well, one thing we cannot deny is that before the reform, people were poor but excelled in virtue; the society had better order and less scandal. However, this cannot be the criteria to negate the SSC program nowadays. Since SSC program was conducted after the Mao-era, one should make a judgment based on changes after its conduction instead of comparing the moral level between two different periods. They feel the moral level is worse than before because they have mixed up the frame of reference. Even Feng Chen himself said that ?It may be unfair to say that the SSC drive has accomplished nothing. At a minimum, it has called national attention to the moral crisis. Some steps have been taken to reverse the decay? (Chen, 39) Then, is spiritual civilization in the end a step forward or backward in the reform-era? I prefer to answer this way: it?s not a backward, if instead of a forward. In general, the development of socialist spiritual civilization can be divided into two categories: cultural construction and thought construction. The former includes socialist ideals, moral and discipline while the latter involves projects such as the development of socialist cultural, technology, health protection and, education cause. ...read more.

In conclusion, based on the above arguments and facts, I do not agree with the view that the effort of the Chinese central party-state to reassert control over ?thought work? and to build a ?socialist spiritual civilization? has largely failed. Such opinion is too pessimistic and the ideological building in fact has functioned at least in mainland China. Even if a small success is valuable and may means a lot. Although problems like widening income gap, corruption, and environmental degradation has emerged in China after the opening-up, instead of a failure, it is the price pay for wealth and strength. In recent years, the Party has committed itself to build a ?socialist harmonious society? and seven major measures have been taken into practices such as narrowing the gap between urban and rural areas, and to build a conservation-minded society. The aim is to fight for a more affluent society (Xiao kang she hui) with a higher level of happiness, justice, conservation and vitality. It is not just a slogan because it matters the life of every Chinese. To be sure, the Chinese Communist Part faces numerous challenges both home and abroad. Fortunately for the Party, ?research suggests that in the absence of any unforeseen external shocks---and continued absence of any viable political opposition---the CCP, far from being on the brink of collapse, is likely to remain in power for the foreseeable future? On the whole, the CCP-led China has been growing up gradually through difficulties and dangers on the road of ?socialist with Chinese characteristics?. ...read more.