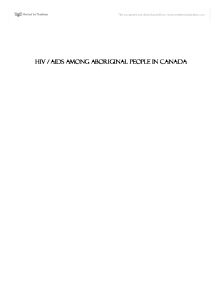 HIV / Aids among aboriginal people in Canada CONTENTS INTRODUCTION 3 WHAT IS HIV/AIDS 4 HOW IS HIV/AIDS CONTRACTED 5 ABROGINAL PEOPLE ARE MORE AT RISK 6 WOMEN ARE HARDEST HIT 8 PREVENTION 10 CONCLUSION ...............................................12 BIBLIOGRAPHY 14 Abstract The Aboriginal people of Canada are over-represented in the HIV and AIDS statistics, they face ongoing challenges, including stigma and discrimination, coping with histories of abuse, and confidentiality concerns, compared with the rest of the population. Introduction Acquired Immunodeficiency Syndrome, or AIDS, is a very recognizable disease in Canada and all other parts of the globe. Being one of the most deadly diseases to man, AIDS is feared because it brings certain death and currently, there is no cure. Unlike other diseases such as Tuberculosis and Malaria, AIDS is actually not the causal factor of death. Instead, other viruses infect the body's cells and this leads to death, but only after AIDS has totally incapacitated the immune system. The majority of AIDS patients die from pneumonia, while some suffer various other infections of cancers and tumours (Health Canada Agency, 2010). Historically, Aboriginal people have been dramatically affected by epidemics of infectious disease. Today, levels of morbidity and mortality from such illnesses are much higher than in the broader Canadian population. The HIV/AIDS pandemic continues to grow and threaten Aboriginal Peoples throughout Canada. The last decade has seen a steady rise in Aboriginal AIDS cases in Canada. Some studies have shown that as many as twenty percent of 16,000 AIDS cases in this country may be Aboriginal. In 2005, Aboriginal people represented an estimated 200 to 400 new HIV infections that year, according to Canada's Public Health Agency. ...read more.

Before 1993, 11 per cent of all Aboriginal people AIDS cases stemmed from injection drug use. By 2003, this rose to 51.7 per cent (Jackson, Reimer, 2005). The social condition in which many of Canada's Aboriginal people live has an impact on the rates of HIV/AIDS in these communities. Aboriginal peoples living conditions or quality of life ranks 63rd, or amongst Third World conditions, according to an Indian and Northern Affairs Canada study that applied Aboriginal-specific statistics to the Human Development Index created by the United Nations. Canada dropped from first to eighth as the best country in the world to live primarily due to housing and health conditions of Aboriginal Communities (Deschamps, 1998). The racism, colonialism, and cultural genocide have had a devastating effect on Aboriginal people in Canada and throughout North America. A 2005 study updated in Canadian Aboriginal People living with HIV/AIDS: Care, Treatment and Support Issues, indicates that 16% of the 195 Aboriginal people living with HIV/AIDS reached in the study, attended a Residential School. 60% of the group said that they had a parent attend a Residential School; while 85% noted that they had a parent, guardian or grandparent who had attended. (Jackson, Reimer, 2005) The effects of Residential Schools will be felt by Aboriginal people for generations to come. Often the effects of poverty, discrimination, and the weight of historical events such as the residential school system lead to negative and destructive coping mechanisms, such as substance abuse. Mobility between city and rural/reserve communities is an important factor in the introduction and spread of HIV as well as access to health and social services. As excerpted from the 2006 Canadian Census; "With a median age of 27 years, the Aboriginal population is on average younger than the rest of Canada's population (median age of approximately 40 years). ...read more.

Such organizations include Healing Our Spirit, The Canadian Institutes of Health Research Institute of Aboriginal People's Health, Canadian Aboriginal AIDS Network, and The National Native Health Association. Conclusion I would say there would still be a stigma about HIV and AIDS in the Aboriginal community, because of the lack of resources that are not there to provide the education and awareness to the youth, and to the general Aboriginal population as a whole. To stop the rising numbers of HIV-infected Aboriginal people, more resources need to be directed towards the people who are infected the most. The HIV epidemic among Aboriginal peoples shows no signs of slowing down. Evidence suggests that injecting drug use is the most common mode of HIV transmission among Aboriginal peoples, and Aboriginal women make up a large part of the HIV epidemic in their communities. This indicates the different characteristics of the HIV epidemic among Aboriginal peoples and emphasizes the complexity of Canada's HIV epidemic. More complete information on the pattern of HIV/AIDS in Canada and HIV testing among Aboriginal peoples are needed to guide prevention and control strategies. In addition, it is vital to conduct research to increase our understanding of the impact of HIV on Aboriginal peoples. The government, community organizations, and voluntary groups must initiate programs of awareness, which must be based in Aboriginal communities. New, innovative approaches are in demand if the AIDS pandemic is to be kept from destroying Aboriginal communities. As for now, the best cure we have for AIDS is education and risk reduction. Because AIDS can only be spread in a few ways, through educating our communities and our young people of the hidden dangers and consequences of catching this virus, we may be able to slow the toll of deaths and end this virus. ...read more.