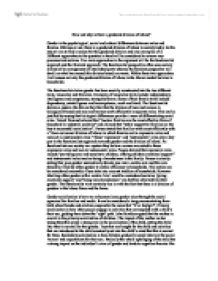 How and why is there a gendered division of labour?

How and why is there a gendered division of labour? Gender is the psychological, social and cultural differences between males and females. Obvious or not, there is a gendered division of labour in society today. In this essay I aim to find a reason for this gendered division and also examples of it. Different approaches to the question in hand will be considered to remove any preconceived notions. Two main approaches to the argument will be the functionalist approach and the feminist approach. The functionalist perspective often sees society as kind of an arrangement of interlinked parts whereas the feminist perspective will dwell on what has caused this division based on events. Within these two approaches I will assess not only the gendered division of labour in the labour market but also in households. The functionalist claims gender has been socially constructed into the two different traits, masculine and feminine. Examples of masculine traits include independency, intelligence and competence, strong and brave. Some of their female traits include dependency, unintelligence and incompetence, weak and timid. The functionalist derives a system like this as they feel that the division of men and women is biologically based and men and women work efficiently in separate roles. ...read more.

Children are being urged to move away from the stereotypical subjects that are being chosen at GCSE and A Level. Peer, family and often sociological pressure causes students to choose subjects suited to their gender. In 2004 94% of all Home Economics GCSE students were female and 98% of all Engineering students were male. At A Level 78% of all Physics students were male. Figures like this show that teenagers are still influenced by gender socialisation and this causes the obvious trends in subject choice. The vast majority of girls selecting home economics not only shows that they are happy to be cast into the stereotype at an early age but also that boys do not see it as a subject they should be studying. Liberal feminists aim to combat the gendered division of labour. They believe that women as individuals deserve the right to pursue their interests without any barriers halting such progress. They want to bring about changes in existing systems that will allow women to progress to their desired occupation. However it can be argued that they are combating the problem in the wrong way. Instead of changing current systems and barriers in the law they need to seek out the major root of the problem which, in my opinion, is the upbringing and socialisation of children. ...read more.

The following information is taken from Braham and James, 2002. The washing and ironing around the house is usually done by the women in 32% of all households compared to the men usually doing it in 1% of households. 1% is insignificant and is a direct example of what is believed to be 'the norm' in today's society. However household tasks that might be considered biologically suited to a male rather than a female such as repairs around the house tell a different story. It is usually the man who does the repairs in almost half the households, yet it is only usually the woman in 3% of households. These figures match the approach of the functionalist who sees labour as a system that requires different skills and different genders offer different skills. It seems that the division of labour in a household matches what is considered the sociological norm. Many women are held back and put off full time work because of the concern over gender based pay systems. Many women are forced to leave because of the discrimination in pay and also in the form of sexual harassment. Imbalances in power between males and females make it increasingly difficult to fight sexual harassment and related issues. Fear of losing ones job and inability to distinguish it from 'a joke' means that many cases go unreported. This is another example of how easily women can be put off work. ...read more.