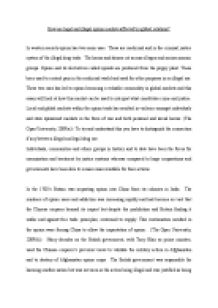 How are legal and illegal opium markets affected by global relations?

﻿How are legal and illegal opium markets affected by global relations? In western society opium has two main uses. These are medicinal and in the criminal justice system of the illegal drug trade. The harms and abuses cut across all ages and socioeconomic groups. Opium and its derivatives called opiods are produced from the poppy plant. These been used to control pain in the medicinal world and used for other purposes in an illegal use. These two uses has led to opium becoming a valuable commodity in global markets and this essay will look at how this market can be used to interpret what constitutes crime and justice. Local and global markets within the opium trade has resulted in violence amongst individuals and state sponsored markets in the form of war and both personal and social harms. (The Open University, 2009(a)). To try and understand this you have to distinguish the connection if any between illegal and legal drug use. Individuals, communities and ethnic groups in history and to date have been the focus for examination and treatment by justice systems whereas compared to large corporations and governments have been able to remain unaccountable for their actions. ...read more.

This misrepresentation resulted in an increase in addictions to the drug and also several deaths of the drug users. No convictions or criminal action was bought against any individuals within the company. The fine was not of any great financial consequence when you consider the profits this company makes. As a result of The Prescription Drug User Fee Act of 1992 the Food and Drug Administration has been funded in part by the pharmaceutical industry, thereby allowing its independence to be questioned. This is an example of how large corporations are apparently untouchable to justice but also that through legislation they are often responsible for their own regulations and avoid being held fully accountable for their actions and this could increase the likelihood of corruption taking place within the industry. If this was the same situation with illegal drugs production, criminal prosecution and possible prison sentences of the individuals would have happened. This once again shows how corruption can influence outcomes in the global drugs markets. (The Open University, 2009(b)). Some countries have used their influence on multinational companies, who synthesise opiods and governments of countries who produce opiods like India and Turkey. ...read more.