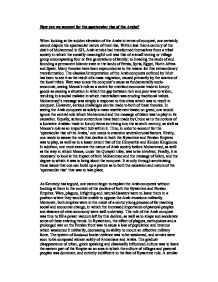 How can we account for the spectacular rise of the Arabs?

How can we account for the spectacular rise of the Arabs? When looking at the sudden elevation of the Arabs in terms of conquest, one certainly cannot dispute the spectacular nature of their rise. Within less than a century of the death of Mohammed in 632, Arab armies had transformed themselves from a tribal society in which the socially meaningful unit was that of a small tenting or village group encompassing four or five generations of family; to invading the lands of and founding a permanent Islamic state in the lands of Persia, Syria, Egypt, North Africa and Spain. Many theories have been expounded as to the reason for this extraordinary transformation. The classical interpretation of the Arab conquests outlined by Muir has been to see it as the result of a mass migration, caused primarily by the avarice of the local tribes. Watt was to see the conquest's cause as fundamentally socio-economic, seeing Mecca's role as a centre for overland economic trade in luxury goods as causing a situation in which the gap between rich and poor was to widen, resulting in a social malaise in which materialism was eroding traditional values. Mohammed's message was simply a response to this crisis which was to result in conquest. However, serious challenges can be made to both of these theories. In seeing the Arab conquests as solely a mass resettlement based on greed, one would ignore the central role which Mohammed and the message of Islam was to play in its causation. ...read more.

As safety in Arabian society was provided not by the State but by kin and the principle of retaliation, it led to a situation in which it was geared towards warfare. Amongst full members of the tribe there were few civilians, and all adult males could be mobilised to defend the camp or participate in the institution of ghazw or raids. This resulted in a state of affairs whereby at the time of the Arab conquests, most Arab men were to have military training and experience, in contrast to both the Byzantine and Sassanian Empires. Additionally, the Arabic speaking populations were united by both a common language and sense of ancestry. The sixth century had seen the development of a collective poetic language at the court of the Kings of Hira, which was generally understood throughout Arabia. This language was vitally important in understanding the unity that was to lead to the conquests, as it was to make communication possible between groups from many different areas, and make the fundamental teachings of Islam comprehensible to many different tribes. In understanding both Arab military prowess and unity, it is important to remember that preconditions for both of these were inherent in Arabic society for a significant period of time before the conquests were to come about. Indeed, when examining the unity of purpose which was to lead to the conquest, one cannot ignore the role of the rise of the Quraysh tribe in the city of Mecca and its eventual control of trade in north eastern Arabia. ...read more.

Furthermore, as the unified Islamic community was to bring an end to raiding within the community, it was necessary to find both another outlet for the martial energies of the tribesmen and another source of revenue for nomads. Thus, whilst preconditions for Arab conquest were certainly present, it was the actions of Mohammed and the dynamism of the message of Islam as both a unifying force and motivation for conquest which was to bring the 'spectacular rise' into fruition. In conclusion, one cannot account for the Arab conquests without looking primarily to the role of Mohammed and the message of Islam. Whilst one can certainly assert the importance of the decline of the two neighbouring powers, the predisposal of Arabic society to unity and conquest and the importance of the Meccan network of trade, in terms of unification and motivation, Mohammed's feats and message were the key. Mohammed was able to take advantage of the common Arabian culture in addition to the network of Mecca, turning them from a trading alliance of disunited tribes into a powerful, unified force through the message of Islam. This force was able to, in turn, take advantage of the weaknesses of its neighbours resulting in a spectacular and sudden conquest. Thus, whilst the preconditions for the spectacular success of the Arabic world were in place, it was the force and energy of a single man and his message which was to bring it into execution. Therefore, in understanding the establishment of Arabic and Islamic hegemony, one need not look further than Mohammed himself. ...read more.