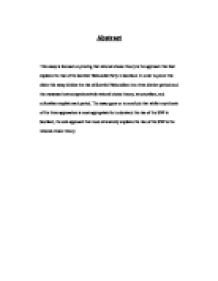 Abstract This essay is focused on proving that rational choice theory is the approach that best explains the rise of the Scottish Nationalist Party in Scotland. In order to prove this claim this essay divides the rise of Scottish Nationalism into three distinct periods and then assesses how comprehensively rational choice theory, structuralism, and culturalism explain each period. The essay goes on to conclude that whilst a synthesis of the three approaches is most appropriate for understand the rise of the SNP in Scotland, the sole approach that most extensively explains the rise of the SNP is the rational choice theory. Student number - 110118471 Which of the three explanations of nationalism best explains the rise of the Scottish Nationalist Party in Scotland? With the competing explanations of nationalism we see on one hand approaches which are methodologically holistic, focusing on structures and cultures, marginalizing the actions of individuals. On the other hand we have methodologically idealistic approaches, centering their theses on the ability of rational individuals to mould their future. Whilst there is much overlapping between a number of theories on the topic of nationalism, the three approaches that shall be assessed are rational choice theory, culturalism, and structuralism. In order to assess the value of the three schools of thought, I will firstly define three distinct periods in the development of Scottish nationalism, from 1800 to 1934, 1934 to 1965, and 1966 to 2011. ...read more.

A Marxist approach holds weight in this period since it is evident that it was in the interests of the Scottish ruling classes to maintain alliance with the Union. Nairn (1979, p.123-4) adds an important dimension to this class based structuralist argument by stating that the immigration of the Scottish middle class intelligentsia to England due to the economic opportunities, whose function in his theory is to educate and arouse the masses into action, was a factor in the absence of Scottish nationalism in this period. This again gives strength to the Marxist structuralist argument that both the economy and class dictate the nature of society. As has been shown with reference to the period 1800-1934, the reasons why Scottish nationalism was minimal at this point can be explained using a synthesis of both the structuralist and rational choice arguments, which both act to discount the argument from the culturalist perspective. The period from 1934-1965 is one that is distinct because it sees a rise in nationalist sentiment, but crucially no significant rise in support for the SNP which was created in 1934. In explaining this period the rational choice approach is the most encompassing as its stance that sees individuals as rational and calculating actors explains why the disorganized SNP failed to gain momentum. ...read more.