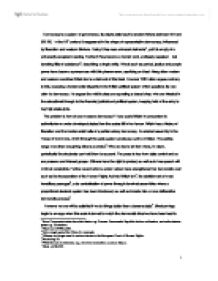 Democracy is a system of governance, its origins date back to ancient Athens between 461 and 322 BC.  In the 19th century it reappeared in the shape of representative democracy, influenced by liberalism and western thinkers. Today it has near universal claimants[1], yet it is empty of a universally accepted meaning. Further it ‘has become a hurrah word, endlessly repeated… but denoting little of substance’[2], describing a single entity. Words such as perfect, justice and people power have become synonymous with this phenomenon, ascribing an ideal. Along other modern and western countries Britain too is a claimant of this ideal. However Will Hutton argues contrary to this, exposing a fundamental disparity in the British political system which questions its very claim to democracy. He argues the middle class are operating a closed shop: who are infested in the educational through to the financial, judicial and political system, keeping hold of the entry to key high status jobs.

The problem is how do you measure democracy? If you scale Britain in comparison to authoritarian or under-developed states then the scales tilt in her favour. Britain has a history of liberalism and the fundamental traits of a parliamentary democracy. An elected assembly in the House of Commons, which through the party system produces a prime minister. The parties range more than one giving citizens a choice[3]. Who are fee to air their views, in return, periodically the electorate can hold them to account. The press is free from state control and so are pressure and interest groups. Citizens have the right to protest, as well as to free speech will minimal constraints. Further recent reforms under Labour have strengthened her democratic zeal: such as the incorporation of the Human Rights Act into British law[4], the abolishment of most hereditary peerages[5], a de-centralisation of power through devolved assemblies where a proportional electoral system has been introduced, as well as inroads into a more deliberative democratic process[6].

However no one will be satisfied if we do things better than a banana state[7]. Shortcomings begin to emerge when this scale is turned to match the democratic ideal we have been lead to believe in. Parliament is composed of both the House of Lords as well the Commons of which only the Commons is elected. The House of Lords lacks both its own legitimacy and any credibility to keep ‘checks ‘on the Commons. The Queen’s[8] function as a theoretical fountainhead, a symbol of continuity,[9] is a ceremonial figure we are told; yet in the situation of a hung The monarchy issue needs to be addressedparliament or national emergency holds extensive levers[10]. This is coupled with the powers of the Prime Minister, who holds the Queen’s Royal prerogative. Although Tony Blair possibly set a   precedent with a vote in the Commons before the Iraq war, the power to bypass all elected institutions remains within the Prime Minister’s reach.

In recent years the Government has in fact shown its capacity to down drawn grade essential checks and balances bypassing Cabinet. ‘It has replaced peers with Labour cronies…and tried to rig elections in Wales and London’[11]. Due to the nature of a fusion of power between judiciary, executive, and legislature, gives the Prime Ministers excessive powers. He is the leader of the governing party; he has powers of appointment over key positions within the Cabinet and whips, as well as advisers who enforce his will Far from being ‘first amongst equals’. Although some commentators have drawn similarities with a prime ministerial government or presidential[12], in reality the question lies in the nature of representative democracy we have. The electorate has neither has the power to choose the Prime Minister directly, nor decisions that are made in Parliament[13].

Other non-elected organisations are increasingly playing a pivotal role in the political process, such as quangos. The Public Accounts Committee has recorded several occasions where public money has been squandered[14]. The transfer of interest rates to the Bank of England because elected politicians cannot be trusted does not increase the strength of democracy. Another

fundamental pillar of modern democracy is the role of pressure and interest groups, healthy we are told. Yet the power and influence contest is unequal in shaping decisions[15].

The media, the God of the modern age, may be free from direct state control, but buy no means free from the same elite infestation. The press makes no secret of their preferences, largely run by media tycoons such as Rupert Murdoch[16]. Political education has been enforced by the media[17]. Recent revelations in party funding and cash for peerages, has added to the sleaze and secrecy politicians already entail. Further, while the banner of democracy is hailed, many tyrannical, non-democratic regimes and elites have been aided abroad[18].

Recent elections in 2001 and 2005 had a two-fold manifestation[19]: firstly it became a warning to the existing elites, and secondly it exposed a democratic deficit since ‘democracy presupposes active citizen involvement’[20]. The outcome was a consequence of an electoral system designed to keep two parties alternating in power, elective despotism. We were told this was ‘voter contentment’, however research has shown this is not true[21]. In 2006 an independent inquiry published a report describing a ‘democratic malaise…political institutions and their politicians are failing, untrustworthy, and disconnected from the great mass of the British people’[22].

So, the question should be how democratic is democracy? Fukuyama[23] claims liberal democracy’s triumph, yet certain basic questions remain on democracy’s nature and its practice. An unquestionable taboo has been ignited around the ‘doctrine’ of democracy. In the British context certain remedies need to be addressed. The electoral method needs to incorporate proportionality of parties; Parliament itself needs to be more representative of the population it is representing. The House of Lords needs democratic legitimacy if at all it remains both within it and Parliament, formal checks and balances need to be introduced[24]. Political education has to be nurtured at school, and not left to wild tabloids[25]. The monarchy issue needs to be addressed. Institutions receiving state-funding need to be regulated in order to have fair enrolment and democratic structures[26].  The electorate needs to encouraged, through these changes to take a more deliberative role.

However the question of what democracy remains. If we accept democracy to be a broad concept, universally compatible with differing cultures and traditions --- in the case of the western world, liberalism — operating ‘in the spirit in which politics is conducted’[27]; creating social, economic and political harmony, rather than a utopian. Then Britain is a democracy which needs some maintenance, in order to have a more equal and just governance. Democracy is the worst form of government, just better than others that have been tried[28].

Barnett, A (editor). Power and the Throne: The Monarchy Debate. London: Vintage, 1994.

[4] Citizens no longer need to redress issues to the European Court of Human Rights.

[6] With the use of referenda, e.g. devolved assembles, London Mayor.

[8] When the Queen ascended the throne in 1953, 3 out of 10 people still believed that she could claim direct descent from God, surely this goes against the principle of a secular modern democratic state. Further readingseeMorton (1994) p108-129.

[10]In the situation of a hung parliament is which seems to be a real possibility.

[15]During the 1980s The Conservatives expelled the trade unions from a ‘insider’ statu, dining instead with business. Something Labour never completely reversed. Even modern pluralist theorists such as Dahl accept the affluence of business.

[18]Britain has aided: Saddam Hussein, promoted Turkey’s membership into the EU while it has been violating human rights, sold arms to Saudi Arabia and Israel, sided with economic elites in Russia and south Africa, a transnational elite has been created in the globalised world…further reading see Pilger (2003) . Further is a member of organisations that lack democracy, such as the EU and UN.

[19] Both elections had low voter turn-out. In 2001 only 59% of the population voted, (big brother had a better response) in 2005 there was a 2% increase possibly as a consequence of the Iraq war. Local elections have been worse.

[21] Polls taken by MORI for the Electoral Commission and Hansard Society (2005), as well as other organisations like the Power Commission showed the majority of the population involved in some political activity.

[24] Charter 88 have recommended a constitution.