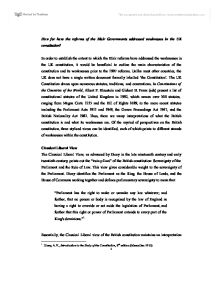 How far have the reforms of the Blair Governments addressed weaknesses in the UK constitution?

How far have the reforms of the Blair Governments addressed weaknesses in the UK constitution? In order to establish the extent to which the Blair reforms have addressed the weaknesses in the UK constitution, it would be beneficial to outline the main characteristics of the constitution and its weaknesses prior to the 1997 reforms. Unlike most other countries, the UK does not have a single written document formally labelled 'the Constitution'. The UK Constitution draws upon numerous statutes, traditions, and conventions. In Constitutions of the Countries of the World, Albert P. Blaustein and Gisbert H. Franz (eds) present a list of constitutional statutes of the United Kingdom in 1992, which names over 300 statutes, ranging from Magna Carta 1215 and the Bill of Rights 1689, to the more recent statutes including the Parliament Acts 1911 and 1949, the Crown Proceedings Act 1947, and the British Nationality Act 1981. Thus, there are many interpretations of what the British constitution is and what its weaknesses are. Of the myriad of perspectives on the British constitution, three stylised views can be identified, each of which points to different strands of weaknesses within the constitution. Classical Liberal View The Classical Liberal View, as advanced by Dicey in the late nineteenth century and early twentieth century, points out the "twin pillars" of the British constitution: Sovereignty of the Parliament and the Rule of Law. This view gives considerable weight to the sovereignty of the Parliament. Dicey identifies the Parliament as the King, the House of Lords, and the House of Commons working together and defines parliamentary sovereignty to mean that: "Parliament has the right to make or unmake any law whatever; and further, that no person or body is recognised by the law of England as having a right to override or set aside the legislation of Parliament, and further that this right or power of Parliament extends to every part of the King's dominions."1 Essentially, the Classical Liberal view of the British constitution maintains an interpretation parallel to the Westminster model of government, emphasising the supremacy of the Parliament in British government. ...read more.

remained in a transitional chamber. The eventual goal was the abolition of all hereditary peers and the 1999 Act states in section 1 that: "No-one shall be a member of the House of Lords by virtue of a hereditary peerage" and those excepted from the rule will remain so "until an Act of Parliament provides to the contrary".4 The second step on reforming the composition of the House of Lords proved to be the stalling point for the government. A Royal Commission headed by Lord Wakeham reported in January 2000, recommending a chamber of 550 members, most of whom to be appointed by the Appointments Commission, and about 20% of the members being elected to represent regions. Yet, this was heavily criticised by all parties. A Joint Committee in 2001 attempted to resolve the issue and ended up presenting the Parliament with seven options to choose from - fully appointed, 20% elected, 40% elected, 50% elected, 60% elected, 80%, and fully elected. All of the options were defeated in the series of confusing votes in 2003, and all other subsequent attempts at resolving this issue were not implemented. Though there have not been further reforms in the House of Lords concerning its composition since 1999, the Act was a drastic departure from the British constitution insofar that it challenges the hereditary right of the ruling elites that existed for roughly 800 years. Although the power of the Lords had been on decline since 1911, it was the Blair reforms that really addressed the weakness present in the British constitution that was identified by the Classical Liberal View of the constitution. Reform of the Judiciary In 2005, the Constitutional Reform Act further modified the House of Lords to address the judiciary element in the Upper Chamber. It was deemed contrary to the principle of the separation of powers to maintain the Law Lords and the functions of the Lord Chancellor. ...read more.

The autonomy given to the regional governments have not broken up Britain but instead have produced new structures of dependency within the British system of government. Though devolution has created weaknesses of each own as exampled by the West Lothian problem and the alleged threat to parliamentary sovereignty, it has been successful to a certain extent by releasing power to regional governments. Final Remarks It is evident that the Blair government has attempted to address the major weaknesses in the pre-1997 constitution. The anachronistic elements of the House of Lords were modified; the judiciary was made independent; the Human Rights Act provided room for judicial review and defined the British relationship with Europe; and devolution was set on track. Yet, the process of constitutional reform is far from complete. The government must still wrestle with the problem of the Upper Chamber in determining the composition of the Lords. Significantly, the first-past-the-post electoral system, deemed to be unrepresentative, has not yet been reformed. The new powers given to the judiciaries must be fine-tuned and given more public attention. Devolution is a yet unfinished process and weaknesses it has thus presented to the constitution must be addressed as well. The reforms of the Blair governments addressed weaknesses in the UK constitution by starting ambitious modifications. Though these first steps were great progress, more must be done to further strengthen the British constitution by following governments. 1 Dicey, A.V., Introduction to the Study of the Constitution, 8th edition (Macmillan 1915) 2 Jennings, I.W., Cabinet Government, 3rd edition (Cambridge University Press 1965) 3 Amery, L.S., Thoughts on the Constitution, 2nd edition (Oxford University Press 1953) 4 House of Lords Act 1999, 11 November 1999. Available at the UK Parliament Website (cited 28 Jan 2011) <http://www.legislation.gov.uk/ukpga/1999/34/introduction/enacted?view=plain> 5 Constitutional Reform Act, 24 March 2005, UK Parliament Website (Cited 29 January 2011) <http://www.publications.parliament.uk/pa/cm200405/cmbills/018/2005018.pdf> 6 Hazell, R., 'The Continuing Dynamism of Constitutional Reform', Parliamentary Affairs, Vol. 60 No.1, 2007 ?? ?? ?? ?? 1 ...read more.