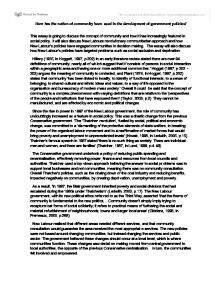 How has the notion of community been used in Government policies?

This essay is going to discuss the concept of community and how it has increasingly featured in social policy. It will also discuss New Labours revolutionary communitarian approach and how New Labour's policies have engaged communities in decision making. The essay will also discuss how New Labour's policies have targeted problems such as social exclusion and deprivation. Hillery (1955, in Hoggett, 1997, p.202) in an early literature review stated there are over 94 definitions of community, nearly all of which suggest that it 'consists of persons in social interaction within a geographic area and having one or more additional common ties.' Hogget (1997, p.202-203) argues the meaning of community is contested, and Plant (1974, in Hogget, 1997, p.202) states that community 'has been linked to locality, to identity of functional interests, to a sense of belonging, to shared cultural and ethnic ideas and values, to a way of life opposed to the organisation and bureaucracy of modern mass society.' Overall it could be said that the concept of community is a complex phenomenon with varying definitions that are relative to the 'perspectives of the people and institutions that have espoused them' (Taylor, 2003, p.2). They cannot be manufactured, and are affected by economic and political changes. Since the rise to power in 1997 of the New Labour government, the role of community has undoubtingly increased as a feature in social policy. ...read more.

It was clear the top-down style of decision making was not working and was leaving people socially excluded and disempowered. New Labours perception of community is based on Amitai Etzioni's (1993) 'idea of responsibilities that individuals hold towards their community as the other side of rights.' Etzioni states (1993, p. ix, in Fremeaux, 2005, p.269) 'Communities are social webs of people who know one another as persons and have a moral voice. Communities draw on interpersonal bonds to encourage members to abide by shared values. . . Communities gently chastise those who violate shared moral norms and express approbation for those who abide by them.' Robert Putnam's (1993, 2000, in Fremeaux, 2005, p.269) concept of 'social capital' 'which insists on the value of social networks and 'the norms or reciprocity and trustworthiness that arise from them' (2000, in Fremeaux, 2005, p.269) is also a key factor in New Labour's ideology. 'The concept of social capital, or its absence, has been used in the specification of a wide range of social problems that New Labour seeks to address including, most obviously, social exclusion, but also educational underachievement, health inequalities, community breakdown, teenage pregnancy and urban deprivation' (Johnston & Percy-Smith, 2002, p.322). In 1998, the government formed the Social Exclusion Unit (SEU) which produced a report entitled Bringing Britain Together (SEU, 1998). The report identified about 3000 neighbourhoods which were suffering from high levels of poverty, unemployment, crime, poor health and schooling, and extremely poor service delivery. ...read more.

argues New Labour does not have one consistent definition of community and has never been communitarian, but instead have simply continued Thatcher's legacy. In conclusion, despite the contested nature of community, New Labour has used the concept as a way of reorganising welfare and service provision. It has moved away from funding led solutions, which typified policy between 2001-2002, and instead made the large number of service providers work more efficiently thus making the solution more sustainable. Community is a socially-constructed, complex, dynamic but contested phenomenon that is affected and changed by economic and political decisions. It is different for every individual, and it helps to provide for our needs, such as education, housing and doctors. It fosters a sense of belonging and identity, with everyone belonging to more than one community. A neighbourhood with good social capital, social networks and services will need different help to a neighbourhood with very little of these. The New Labour government, who define community in a largely neighbourhood geographical context, have used the concept as a way of reorganising social policy and welfare with the aim of returning to the 'golden age' of post-war community. This is a completely new political u-turn that targets services at the needy, involves communities in decision making, and introduced doing 'with' instead of doing 'to' communities. New Labour's policies are aimed at sustainability and financial efficiency, and have seen substantial changes in terms of health, policing and neighbourhood regeneration. Using bottom-up strategies, the government has sought to empower people, increase multi-agency working and tackle key problems such as social exclusion, poverty and deprivation. ...read more.