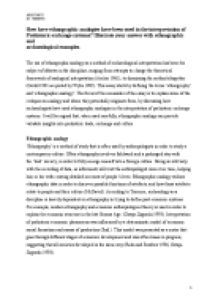 How have ethnographic analogies have been used in the interpretation of Prehistoric exchange systems?

However, in his attempt create universals he occasionally bases his generalisations on little evidence. In his work, he suggests that that the practice of smoking hides, was women?s work (Binford 1967). Hide smoking (source: http://i163.photobucket.com/albums/t317/YTBM/Chippewa1900.jpg) He based this analysis of hide smoking on ethnographies that suggested women were the ones who were mostly concerned with the practice. However, he then further generalises, claiming that hide smoking was done by women universally, and that this would influence changes in style (Ibid.). In 1961, Robert Ascher suggested that analogy could be put onto ?firmer foundations? if archaeologists would accept its subjectivity (Ascher 1961). He believed that systematic analogy would pull the method out of its controversial status by stating the use of relevant analogs, why those were chosen as analogs for that particular phenomenon, and that these were merely suggestions, not facts (Ibid.). In his paper, Binford occasionally omits this from his analysis, which may then make it appear too factual. Grahame Clark has also used ethnography in order to try and interpret aspects of prehistoric exchange. His analogy draws upon Marcel Mauss? influential ethnography of Melanesia and the ?gift? (Bahn and Renfrew 1996). He links the principles of Mauss gift society, in which exchange is based on the reciprocation of gifts and relationships of obligation and interdependence between people, with an axe trade network that occurred in the British Neolithic (Ibid.). ...read more.

This ?value? in ethnographic data is backed up by Bahn and Renfrew, who write that ethnographies on West-African markets and for example pre-industrial China can provide archaeologists with insight into exchange (1996). Conclusion The way in which ethnographies are used in analogy possibly determines their value as a method of interpretation. Ethnographic analogy is not an effortless way of reconstructing the past through present day reflections in the way that Sollas argued in his studies. It is a method that is considered flawed by some, in the way that it can overgeneralise similarities between material cultures, or assume that societies remain unchanged throughout history. Gould?s dismissal of analogical reasoning altogether is met with resistance from Alison Wylie, who sees flaws in his argument and claims that Gould actually uses analogy in order to prove his point. Many archaeologists also see the positive sides of analogy, arguing that using ethnographic analogy can open up new doors in the way people think about exchange and trade in prehistory. Ethnographic analogy in discussing prehistoric exchange is perhaps not useful in directly reconstructing the past through reflections from the present, but it can provide archaeologists with new ways from which to approach the subject of exchange in prehistory. It is perhaps unable to answer directly whether the British Neolithic was an exchange society similar to modern day Melanesia, but it can at least open up a possibility which, without ethnography, would not have existed. ...read more.