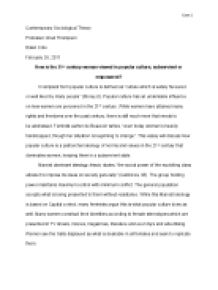 How is the 21st century woman viewed in popular culture; subservient or empowered?

﻿Cote Contemporary Sociological Theory Professor Chad Thompson Dawn Cote February 26, 2011 How is the 21st century woman viewed in popular culture; subservient or empowered? In simplest form popular culture is defined as ?culture which is widely favoured or well liked by many people? (Storey,6). Popular culture has an undeniable influence on how women are perceived in the 21st century. While women have attained many rights and freedoms over the past century, there is still much more that needs to be addressed. Feminist author de Beauvoir writes, ?even today woman is heavily handicapped, though her situation is beginning to change?. This essay will discuss how popular culture is a patriarchal ideology of norms and values in the 21st century that dominates women, keeping them in a subservient state. Marxist dominant ideology thesis, states, ?the social power of the exploiting class allows it to impose its ideas on society generally? (Callinicos, 95). The group holding power maintains maximum control with minimum conflict. The general population accepts what is being presented to them without resistance. While this Marxist ideology is based on Capital control, many feminists argue this is what popular culture does as well. Many women construct their identities according to female stereotypes which are presented in TV shows, movies, magazines, literature and even toys and advertising. ...read more.

The Frankfurt School?s theorists Adorno and Horkeimer view popular culture as mass deception. Culture is imposed on the masses by the State, shaping their tastes and desires resulting in false needs. This ideology keeps women in a subordinate state. Ideas presented in the media present false needs for women. Advertisements for cleaning products that ?save time? or are more effective, hygienic products and makeup that are ?technologically advanced? and the clothing manufacturers introducing new fashions each season, encourage women to feel the need to live that specific lifestyle presented to them. In the 1950?s and 60?s magazines presented women as a child rearing housewife that took care of their working husbands and maintained the home. As decades went by and we emerged into the 21st century many women started to work outside the home. Most magazine and television advertisements impose an ?unrealistic view of women?s lives? (Wright). Women were given more diverse roles and having interests beyond maintaining a home. However despite this change the image presented is still unattainable. A survey done by Splash Consulting group ?found 89 per cent of women felt the way they were portrayed in advertising and marketing harmed their ability to be taken seriously in the workplace? (Wright). While the discussion of this essay is the subordination of women, we must also look at how popular culture affects little girls. ...read more.

Author Gail-Piorek sarcastically states, ?so, third graders now worry about learning multiplication, Justin Beiber and yes, wrinkles.? High heel shoes are now made for girls as young as 2. Once the pictures of Tom Cruise and Kate Holmes daughter Suri Cruise wearing shoes with a two inch heel were plastered all over the tabloids, mothers were running out to stores to buy their own little 3 year old her first pair of heels. Girls are being taught at a young age what fashions are shown on the celebrity children and in advertisements is what they need to have to be liked or popular. Popular culture emits power over society. Both men and women are bombarded with ideologies that are viewed as the norm or ?status quo?. However, the majority of these ideologies are based on patriarchal beliefs. What women should look like, act like, and even sound like are constantly presented in TV, movies, music, advertising and literature. If a woman strays from what is believed to be popular then they are not ?normal?. We have come a long way in women?s rights and freedoms. In a western society women have the right to vote, they can get a higher education and professional jobs, they can even run for office, however they still have to do this all in a ?man?s world? and this keeps women in a subservient position in society. ...read more.