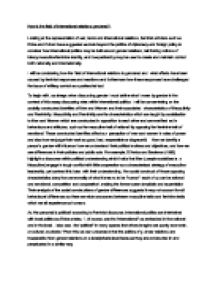 How is the field of international relations gendered?

How is the field of international relations gendered? Looking at the representation of war, terror and international relations, feminist scholars such as Enloe and Cohen have suggested we look beyond the politics of diplomacy and foreign policy to consider how international politics may be built around gender relations; reinforcing notions of binary masculine/feminine identity, and how patriarchy may be used to create and maintain control both nationally and internationally. I will be considering how the field of international relations is gendered and what effects have been caused by feminist responses and reactions and furthermore how these responses have challenged the issue of military control as a patriarchal tool. To begin with, as always when discussing gender I must define what I mean by gender in the context of this essay discussing roles within international politics. I will be concentrating on the socially constructed identities of Men and Women and their associated characteristics of Masculinity and Femininity. Masculinity and Femininity are the characteristics which are taught by socialisation to Men and Women which are constructed in opposition to each other and are manifested in behaviours and attitudes, such as the masculine trait of rationality opposing the feminine trait of emotional. These constructed identities affect our perception of men and women in roles of power and also how we judge their work as good, bad, respectable or disgraceful. How we identify a person's gender will influence how we understand their political motives and objectives, and how we see differences in their policies and public acts. For example, D'Amico and Beckman (1995) highlight a discourse within political understanding which holds that Men ( people socialised as Masculine) ...read more.

The title 'ladies committee' offers no description of the work involved, and makes one think more towards the idea of a coffee morning or a gossip session- just think about the daytime ITV TV programme 'Loose Women' where the celebrity female presenters discuss their lives, current events, media and fashion. While the show discusses politics and current events, views are rarely taken seriously beyond the sphere of 'women's chat' and the show is ridiculed when compared to its American counterpart 'The view', for example in this blog article from The Guardian, written by Joe Jackson in 2011: 'The View is of a different calibre to Loose Women. The former is a respected platform for discussing topical issues and has long attracted top names from sports to showbiz to politics... The latter is widely ridiculed, from its name to its hosts' excruciatingly high-pitched back and forth "discussions".' Here, the cast of 'Loose Women' are attacked the style of their conversation which doesn't fit the expected feminine ideals of respectability displayed in the cast of 'The View', which is regarded as more important, more valid and more legitimate. International politics is often heavily militarised and military organisations are often hyper masculinised although now women in the military are being used for their perceived feminine traits. Policy to utilise feminine roles have been formed with an essentialist view which assumes all female members of the military will think and behave the same due to their gender, and that this will allow them to connect with Afghan women; cultural differences are overlooked, regular social rules are ignored (such as protection over children from strangers). This gendering of cultural relations reduces behaviour to biological constructions of gender identity which are assumed to be experienced in a standardised homogenous way. ...read more.

As gender relations are formulated in similar ways throughout the different spheres of local, international, and global politics I have looked at examples from all of these areas to demonstrate that international relations are based on binary gender identities and characteristics which are applied to women in many political spheres in order to create and sustain a gender hierarchy which places men and the characteristics of masculinity at the top. This hierarchy is sustained by placing value on masculine characteristics like rationality and toughness but recognising and celebrating these characteristics only if they are displayed by men who hold political power. This process naturalises certain characteristics as inherently male and legitimises the invisibility of women in international relations - apart from in roles where a non-threatening display of female binary characteristics or values to male power can be accepted such as in the role of the 'patriotic wife', or a 'ladies committee' while other forms of female identity which display toughness or rationality (which would be celebrated if they were displayed by men in the political field) are kept invisible by declaring their ideas and efforts as illegitimate by undermining their femininity such as the 'political na�fs' and 'unwashed mothers'. From my brief and incomplete discussion of the gendered role of women in international relations I can conclude that the field of international relations is heavily gendered in a way which limits the freedom and mobility of women, and confines their visibility to particularly insignificant roles which are shown to support men. Women's significance in international relations is undermined because of their identity as female and the threat it might hold towards men and the patriarchal structure of politics. ...read more.