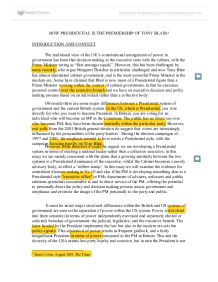 How presidential is the premiership of Tony Blair.

HOW PRESIDENTIAL IS THE PREMIERSHIP OF TONY BLAIR? INTRODUCTION AND CONTEXT The traditional view of the UK's constitutional arrangement of power in government has been that decision making in the executive rests with the cabinet, with the Prime Minister acting as "first amongst equals". However, this has been challenged by many recently, who argue Margaret Thatcher in particular challenged and now Tony Blair has almost eliminated cabinet government, and is the most powerful Prime Minister in the modern era. Some have claimed that Blair is now more of a Presidential figure than a Prime Minister working within the context of cabinet government, in that he exercises personal control over the executive branch and we have an executive decision and policy making process based on an individual rather than a collective body. Obviously there are some major differences between a Presidential system of government and the current British system. In the US, which is Presidential, you vote directly for who you want to become President. In Britain, you are voting for an individual who will become an MP in the Commons. The public has no direct say over who becomes PM; they have been chosen internally within the particular party. However, exit polls from the 2001 British general election do suggest that voters are increasingly influenced by the personalities of the party leaders1. ...read more.

For example Blair promised that NHS spending would match the EU average within a few years without consulting his Chancellor to see if it was plausible8. Mo Mowlam has claimed that Blair prefers one to one meetings with ministers and that little was decided in full Cabinet, showing Blair's dislike for collective cabinet government9. The evidence of Blair building up a PM dept similar to the US Presidents Executive Office is perhaps the biggest indication of the style of Tony Blair's premiership. The No.10 policy unit, as well as a Press Office, are now under control of the Chief of Staff Alistair Campbell10. Their task is to essentially portray the PM and government in a good light, as well as ensuring that all his aims are pressed forward. This is also achieved with the use of close allies, who sit on a range of cabinet committees, to ensure policy proposals fit in with overall aims and ideology, for example in 1998, Peter Mandelson was sitting on 11 different committees11. There are also more whips than ever before, who reprimand anyone who steps out of line, such as Paul Marsden who voiced his discontent over Labour's handling of the Afghanistan crisis, while the PM personally and publicly reprimanded Claire Short over her comments on tax rises. ...read more.

This is an interesting essay. What is here is really good - the depth of analysis is unusually strong, and is well focussed on the question. There are few sweeping statements, the structure is good and easily comprehensible, and the introduction and conclusion are good.

However, what is missing here is any critical engagement with the academic literature. There are barely any academic sources and the referencing is insufficient. If the author had been more critical of factual statements, made reference to journal articles and more secondary academic literature, this could be a very good essay indeed.