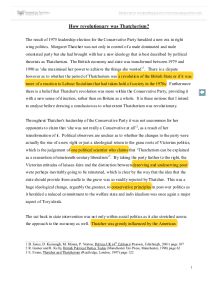 How revolutionary was Thatcherism?

How revolutionary was Thatcherism? The result of 1975 leadership election for the Conservative Party heralded a new era in right wing politics. Margaret Thatcher was not only in control of a male dominated and male orientated party but she had brought with her a new ideology that is best described by political theorists as Thatcherism. The British economy and state was transformed between 1979 and 1990 as 'she maximised her power to achieve the things she wanted'1. There is a dispute however as to whether the period of Thatcherism was a revolution of the British State or if it was more of a reaction to Labour Socialism that had taken hold of society in the 1970s. Furthermore there is a belief that Thatcher's revolution was more within the Conservative Party, providing it with a new sense of direction, rather than on Britain as a whole. It is these notions that I intend to analyse before drawing a conclusion as to what extent Thatcherism was revolutionary. Throughout Thatcher's leadership of the Conservative Party it was not uncommon for her opponents to claim that 'she was not really a Conservative at all'2, as a result of her transformation of it. Political observers are unclear as to whether the changes to the party were actually the rise of a new right or just a ideological return to the grass roots of ...read more.

There is an interesting argument put forward by Political theorists such as Bill Jones and Eric Evans, who believe that Thatcherism was not really revolutionary at all but a response to events else where in the world and to break with consensus and co-operation. Britains industries were in a steady decline and because they were not efficient enough they were unable to find markets for goods. Thatcher's response to this inefficiency by turning to monetarism was 'necessary because the traditional co-operative approach was responsible, at least in part, for the failed ________________________ 4 P. Jenkins, Mrs Thatchers Revolution: The Ending of the Socialist Era (Pan Books, London, 1987) page 278 5 F. O' Gorman, British Conservatism: Conservative thought from Burke to Thatcher (Longman, New York, 1986) page 220 policies of the past'6. In his writings Jones has compared the British economy with the rest of the world and he comes to the conclusion that they were all turning to new right wing principles with regards to the economy and therefore 'Thatcherism in Britain was a necessary adjustment to changing patterns in the world economy, without which Britain would lose its present modest place in the international economic hierarchy'7. It is therefore evident that Thatcherism was in part a reaction to consensus politics and the way in which governments overseas were handling their economies. ...read more.

In my opinion from studying the different interpretations of Thatcherism is was revolutionary in the impact that it had on Britain's economy and society as she was the first leader to reduce the governments role in the welfare state and other areas of the economy. The fact that John Smith and Blair were forced to reform the Labour Party as a result of Thatcher's implementations, show that it was also revolutionary on the British Political system. However to say that it was a total revolution would be unsubstantial as the reasons for the so-called revolution were not revolutionary but more of a reaction to the post war consensus and the fear of the rise of Labour Socialism. It also argued that it was only 'half a revolution'16 and that it split Britain into two nations in two minds 'torn between the old welfare ideal and the new enterprise ideal, rejecting socialism but not yet at moral ease with the new order'17. ________________________ 12 M. Lynch, An Introduction to Modern British History 1900-1999 (Hodder & Stoughton, London, 2001) page 178 13 E. Evans, Thatcher and Thatcherism (Routledge, London, 1997) page 66 14 ibid 15 E. Evans, Thatcher and Thatcherism (Routledge, London, 1997) page 72 16 P. Jenkins, Mrs Thatchers Revolution: The Ending of the Socialist Era (Pan Books, London, 1987) page 378 17 P. ...read more.

This is a good essay (the author submitted an upper middle mark, I would have given it a mid-2.1 depending on the level of the module). It shows an adept command of information, which is communicated clearly and systematically. The structure is good. Three things could have been improved upon, although this is within the context of an essay that is already more than satisfactory:

1) More critical use of literature. More often than not the quotations are used to corroborate, not to question. A more thorough and critical engagement with the literature would show greater intellectual depth.

2) Argument - although the structure of the essay is reasonably good (paragraphs flow, their point is clear, and they follow on nicely from each other) a stronger argument to explain the role of each paragraph in expanding an angle would be beneficial. As it is, there are numerous themes here (such as internal party revolution, ideological revolution, state revolution, economic revolution and party system revolution) which could be differentiated between more successfully to contribute to a very nuanced, interesting argument.

3) Greater evidencing of controversial points. Quite a lot of the statements made here are debated and a greater sensitivity to this would elevate the use of information in the essay.