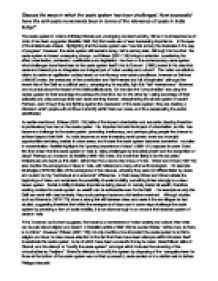 How successful have the anti-caste movements been in terms of the relevance of caste in India today?

Discuss the ways in which the caste system has been challenged. How successful have the anti-caste movements been in terms of the relevance of caste in India today? The caste system in India is infinitely intricate and undergoing constant scrutiny. Since the independence of India, it has been suggested (Beteille 1996:154) that caste was of ever decreasing importance, in the eyes of the intellectuals at least, highlighting that the caste system was "counted among the obstacles in the way of progress". However, the caste system still remains today, half a century later. Although it is true that the caste system is indeed undergoing change, as Eriksen (2001:136) brings to attention, questioning the effect urbanization, profession, qualifications and legislation has had on the contemporary caste system, what challenges have there been to the caste system itself? And is Dumont (1980) correct in his view that caste and hierarchy is an integrated and integral part of Indian society and culture? The Indian constitution claims to desire an egalitarian society based on meritocracy over caste compliance, however as Srinivas (1964:97) notes, the measures of the constitution are "half-hearted and full of loopholes", although the recent rise of the Dalit as a political party, campaigning for equality, fight this "half-heartedness". However, one must ask about the impact of the Dalit political party. On one side the "untouchables" are using the castes system to their advantage for perhaps the first time, but on the other by taking advantage of their solidarity and unity amongst their own caste are they forever strengthening the whole system of caste? ...read more.

Gorringe (2005) talks in his article of the influence of the British on India, and it can be argued that British religion has had an impact on modern day India, through missionaries work for example. This showed an alternative to the Hindu caste system, and some may have converted simply to escape from their caste, raising another challenge to the caste system. Chandra (2005:215) also notes the resurgence of Buddhism and the effect that has had on the caste system, highlighted in Ghandi's actions, Buddhism was another possible alternative to Hinduism and the caste system. Singh (2009:237) highlights that the state wanted "a separation between religion and the state", thus giving way to politics to make significant changes in contemporary India. It is in political movements that we see the biggest challenge to the caste system, demanding egalitarianism, equal rights and opportunities regardless of birth. However, paradoxically, as the political parties find their loyalties within their own caste, it is this very movement which could see the continuation of the caste system, this very movement which makes the caste system ever more relevant. Gorringe (2005:86) recognises the emergence of the political movement following India becoming an independent state, due to the growth of democracy, no doubt due to the fact that those governing the country were now in some way accountable for their actions, the voices of the people had to be heard. As I discussed earlier Beteille (1996:54) ...read more.

There has been social protest, a rise of democracy, emergence of class based economy and certain religious alternatives, none of which, however, have been wholly successful in getting rid of the relevance of caste in India today, although the political movement is ever on going and with what some might say growing clarity and power. After examining some of the challenges to the system, it is possible to use Beteille's argument to demonstrate the state of caste today. Beteille writes that it is with a growing ambivalence that many regard caste today, (1996:153) "to deny any significance to caste at one time and to give it exaggerated importance at another". Demonstrating that whilst many Dalit may argue that caste is not inherent and should be abolished, they seek solidarity and strength from the numbers of their own caste, fighting against something by ever strengthening the ties that hold them where they are. Beteille also notes in his essay (1996) that educated Indians feel that "caste does not exist anymore", although this should not be taken to disregard the relevance of caste today, as it is only those at the top of the caste system who feel they are not affected by it, similar to those at the top of the British class system, who feel there is no class conflict in Britain anymore. It is therefore largely arguable that caste today has as much relevance as it ever has done, even those fighting it fight it through identifying themselves within their caste. ...read more.