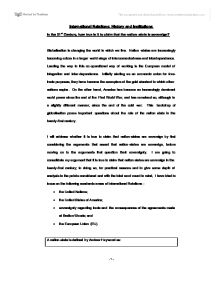 How true is it to claim that the nation-state is sovereign?

In the 21st Century, how true is it to claim that the nation-state is sovereign?

Globalisation is changing the world in which we live.  Nation-states are increasingly becoming actors in a larger world stage of interconnectedness and interdependence.  Leading the way in this co-operational way of working is the European model of integration and inter-dependence.  Initially starting as an economic union for free-trade purposes, they have become the exemplars of the gold standard to which other nations aspire.  On the other hand, America has become an increasingly dominant world power since the end of the First World War, and has remained so, although in a slightly different manner, since the end of the cold war.  This backdrop of globalisation poses important questions about the role of the nation state in the twenty-first century.

A nation-state is defined by Andrew Heywood as:

“A sovereign political association within which citizenship and

nationality overlap; one nation within a single state.”

Anthony McGrew contends that the legal basis and definition of statehood has come about from the treaties of Westphalia.  This, he says, established the framework for what now constitutes nation-states in today’s world.

In terms of the Westphalian Constitution of world politics, Anthony McGrew defines ‘sovereignty’ as:

“within its borders the state or government has

an entitlement to supreme, unqualified, and

A nation-state, in international terms, usually has three defining elements: the people, the government and the territory or landmass.

Taking this definition of sovereignty and description of a nation-state further, we can say that:

A nation-state is a sovereign being; as such, it is entitled to supreme and exclusive political and legal authority within its territory; over its people and landmass.

It is possible to conclude that due to their increasing prevalence during the latter half of the twenty-first century; nation-states in general have not appeared to consider the introduction of intergovernmental organisations as a threat, as we can see from the increasing number of them in the world today and their increasing membership.

The Association of Southeast Asian Nations (ASEAN), the Arab League, the EU, the African Union (AU), the North-American Free Trade Association (NAFTA) are among the most known international allegiances that are operating.  Though all have differing constitutional arrangements, many nation-states are tempted into their fold by the benefits of being a member.

Andrew Heywood offers that the nation-state has become the highest form of political organisation and that it is now taken for granted as the only genuinely legitimate political community.

Heywood’s description is particularly interesting as, regardless of inter-governmental organisations, it purports that the state is the ‘highest form of political organisation’.  This suggests that regardless of the existence of the inter-governmental organisations, the primacy of the nation-state has not been over-taken, in his opinion.  He seems to conclude that in spite of the legal might of international legal bodies such as the EU courts of justice and other supreme legal institutions that can over-rule national governments in line with EU legislation they have ratified.  In this context, it would appear that because of the ratification process by nation-states, that they are indeed sovereign as a result.

In considering the argument that it is not true that nation-states are sovereign, Iraq is a poignant example.  Iraq was until 2003 a sovereign nation-state; regardless of individual’s moral standing on America’s invasion of Iraq, it is a quagmire of difficult questions and even harder answers, regarding the sovereignty of the primary two nation-states involved.  It is possible to see the invasion as a direct contravention of international law.  Some argue that America’s invasion was a direct assault on the sovereignty of a weaker country that had fallen out of its favour.  This vein of argument concludes that America’s fiscal and military dominance in the world means sovereignty is only available to nation-states when America allows it, which is contradictory principle to sovereignty.

Since the Bretton Woods agreement and institutions were implemented, America has enjoyed a hegemony, which has in some ways increased since the collapse of the Soviet Union (SU) in the late twentieth century.  The implementation of:

…has led to ‘Southern’ (developing) nations’ holding a hostility toward America as the world banker; has been responsible for what many South nations consider to be imposing debt repayments, and restricting Structural Adjustment Programmes which many developing nations feel has crippled their economies ever since.

The EU council of members currently has a greater influence of member states laws, border controls, currency and economic framework than at any other time before.

It is often claimed by the right-wing anti-European press that European countries have little or no say in their national affairs.  These, it is claimed are decided in a far-away land of Europe where member states have little or no say.  If we take the example of Ireland and Norway, both are in Northern Europe and have similar sized populations.  Each exports Salmon for consumption in the EU countries.  Ireland is a member of the EU and Norway is not.  Both countries when trading their goods are subject to the rules agreed to, and upheld by the EU council and its member states law enforcement agencies.  When considering this example it is easy to look and say that Norway has greater sovereignty, as it is not bound by the rules of the EU.  However, Norway would find it hard to discontinue its Salmon trading with the EU, so in a way it is bound to the EU and therefore must adhere to rules it had no role in making and no chance of changing.  Alternatively, Ireland has been able to make representation during the process of making the law and could in future propose amendments through its members of the European parliament.

In a similar way, all members of the UN are compounded to follow certain rules and protocols, I am going to consider whether these threaten or enhance sovereignty of nation states.

The UN is widely criticised by students, idealist and the media for inaction at times of crisis, a recent example is Sudan, where it is argued by many that genocide is taking place.  The UN has within its founding charter, the objective of intervention in the aim of protection of a people facing genocide.  However, to date no UN force has entered Sudan to stop the genocidal massacre.  This is due to the UN organisation having no binding power on its members to make them undertake such action.  The Secretary General can express concern at events but unless a majority of Security Council members (including all five permanent members) agree that (in this example, that genocide is taking place and an intervention is necessary, and that they member states will supply the troops, equipment and other resources), the UN is powerless.  This is because, as an organisation, it does not have the power to override en masse nation-states sovereignty.  It can only do this where a single state has breached very specific conditions (in short; genocide and inter-state aggression); this is a further example of the strength of nation-states sovereignty.

While the EU is given power over the nation-states comprising it, at present, they retain one key feature, which differentiates the EU from the old Soviet Union.  If the EU were to impose a directive with which a member state has a fundamental problem, then they would be democratically able to pass through their national parliament, a law that could remove them from the union if they so wished.  This is a key element in the relationship between European states and the EU, adding weight to the claim of sovereignty of nation-states.

I have argued that although there are serious issues to be considered in the claim that nation-states in the twenty-first century are not sovereign, I believe them to be sovereign for the reasons I have outlined above.

I have addressed the arguments around sovereignty regarding the hegemony of the United States of America as the world’s most influential and powerful nation, and as its role as the world banker through organisations such as the world bank and the International monetary fund.

I conclude that although prosperous and modern forward-thinking nation-states do not really have the option of being totally independent, as they will have a sophisticated network of economic international ties.  They do have sovereignty.  They are protected by a complex, sometimes ineffective, sometimes slow-to-react network of world nations that guarantee their sovereignty.