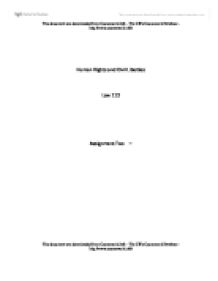 Human rights and civil liberties in prisons. Should a prisoner have rights?

Human Rights and Civil Liberties Law 112 Assignment Two ~ Table of Cases * Hirst v United Kingdom (No.2)[2004]ECHR 122 * R v Hull Prison Board of Visitors, ex parte St Germain [1979] 1 QB 425 * R v Secretary of State for the Home Department, ex parte leech [1994] QB, [1993] 4 ALL ER 539, CA * Raymond v Honey [1983] 1 AC 1, [1982] 1 ALL ER 756, HL Table of Statutes * Human Rights Act 1998 Elizabeth II HMSO * The Representation of the People Act 2000 Elizabeth II HMSO section 3 Should a prisoner have rights? Well to answer this question we must first identify what a right is. A right can be defined as a power or privilege to which one is justly entitled or it can be described as something that is due to a person by law, tradition or nature1. In addition to this human rights are described as those rights that are regarded as fundamental or basic to an individual2. The next step to answering this question is to identify what human rights are guaranteed to every member of society. To do this we must look to the European Convention on Human Rights as well as the Human Rights Act 19983. The European Convention on Human Rights was drafted due to the violence of the Second World War in order to remind member states of the heritage of political traditions and ideals, but most importantly to enforce certain rights stated in the Universal Declaration of Human Rights 19484. ...read more.

Now it has been established which rights prisoners retain and which they lose, the next question to answer is whether or not prisoners should retain these absolute rights, have all rights limited or lose their rights altogether. Many people may ask why prisoners should have any rights at all, many even believe they already have too many26. There are also people who, yes, believe prisoners deserve their basic rights but at the same time also believe that these rights should be restricted and limited27. However there are some people who believe that prisoners are susceptible to human rights abuses and require their basic rights in order to protect them28. The first argument against granting prisoners rights is that when someone violates another human beings right, they themselves should forfeit their right to equal and fair treatment and thus lose their basic human rights29. In addition to this is can be said that by granting prisoners rights it will not teach them what they have done wrong and allow them to learn from their mistakes. This would then encourage prisoners not to re-offend as they are not treated fairly. Also when someone has shown little regard for the rights of their victim(s), imprisonment is their punishment and they should not be allowed to benefit from luxuries such as televisions or have access to a gym which many law abiding citizens cannot have30. ...read more.

As a final point 'Because of their incarceration, and the lack of public and political sympathy, prisoners can be classified as a 'vulnerable' group, particularly susceptible to human rights abuses. On the other hand, there will be a number of reasons why prisoners should not have rights, or, more feasibly, why their rights should be restricted'55. So should a prisoner have rights? Well to answer this question I have looked at which rights prisoners lose and which they retain upon imprisonment. I have then looked at the arguments both for and against prisoners retaining their rights. There are many arguments on both sides however I personally believe that prisoners should have rights so far as they go in order to assist the convicted prisoner to rehabilitate themselves and to lead a law abiding life upon release. I therefore do not agree that prisoners should be receiving benefits such as opportunities to study for a degree when so many people who have not committed any offence cannot afford to take part in, after all these prisoners have broken the law so why should the law then protect these people? However the European Convention on Human Rights has guaranteed to every human being the 16 basic rights stated in the Human Rights Act 199856 and only removes the right to liberty contained in Article 5 from prisoners. This debate on whether or not a prisoner should forfeit his rights still remains open but only to personal opinion. ...read more.