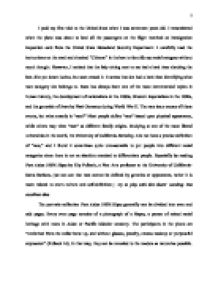 I found it sometimes quite unreasonable to put people into different racial categories since there is not an absolute standard to differentiate people. Especially by reading Part Asian 100% Hapa by Kip Fulbeck, a Fine Arts professor at the University of C

I paid my first visit to the United State when I was seventeen years old. I remembered when the plane was about to land all the passengers on the flight received an immigration inspection card from the United State Homeland Security Department. I carefully read the instructions on the card and checked “Chinese” in the box to identify my racial category without much thought. However, I noticed that the lady sitting next to me had a hard time checking the box. She put down Latino, but soon erased it. It seems that she had a hard time identifying what race category she belongs to. Race has always been one of the most controversial topics in human history, the development of nationalism in the 1880s, Western imperialism in the 1900s, and the genocide of Jews by Nazi Germany during World War II. The race issue causes all these events, but what exactly is “race?” Most people define “race” based upon physical appearance, while others may view “race” as different family origins. Studying at one of the most liberal universities in the world, the University of California-Berkeley, I do not have a precise definition of “race,” and I found it sometimes quite unreasonable to put people into different racial categories since there is not an absolute standard to differentiate people. Especially by reading Part Asian 100% Hapa by Kip Fulbeck, a Fine Arts professor at the University of California-Santa Barbara, [we can see that race cannot be defined by genetics or appearance, rather it is more related to one’s culture and self-definition.]  try to play with this thesis’ wording. But excellent idea.

The portraits collection Part Asian 100% Hapa generally can be divided into even and odd pages. Every even page consists of a photograph of a Hapas, a person of mixed racial heritage with roots in Asian or Pacific Islander ancestry. The participants in the photo are “unclothed from the collar bone up, and without glasses, jewelry, excess makeup or purposeful expression” (Fulbeck 16). In that way, they can be revealed to the readers as natural as possible. On the other hand, the odd pages will list the origins of their families with really small front and then their answers to the question “what are you?” occupied most of the pages so that the reader will know what they are by family origin, and what do they think they are.

The portraits collection is quite interesting, and it engenders an impulse to define the person in terms of an absolute standard [what is the absolute standard? Why is it significant that the book causes the reader to judge and then shows them the reality?]. By looking at any person only from their appearance, there is absolutely no way to tell where they are from or to answer the question “ what are they?” Some of them look Asian, but they may have multiple European bloodlines. For example on page 210, if the readers would look solely at the photograph, they would find a woman with black hair and eyebrows with yellow skin and assume she is an Asian; however, she is also of English, German and Swiss descent. Hence, if she would take a flight to the United States, she might not easily identify herself in any of the racial categories that are provided. [what happens to someone’s mind when they aren’t able to categorize themselves by someone else’s “absolute standard?” what does this mean for racial identity for U.S. imm’s in general?”] As the reader can tell, there is not an absolute standard to categorize any of these people into any of the standard racial categories provided by the Homeland Security Department of the United States, except the choice “others.” Consequently, the definition of race becomes ambiguous as globalization excels and more people fail to fit in the traditional categories.

Moreover, as the development of scientific technology progresses, our physical appearance or family origins are no longer convincing evidence to define race from a biological point of view. “Differences of culture and society distinguish one group from another, but these distinctions are not rooted in biology. New data from the mapping of the human genome reveal that all humans are incredibly similar – in fact, we are 99.9% genetically identical. We are all members of one species, Homo sapiens” (Definition of Race). This scientific discovery has shown us that, although people may differ from physical appearance or family origins, they actually have tiny biological differences and that lead to the conclusion: “that there is no genetic or biological basis for race” (Definition of Race). In comparison, culture has larger impact in distinguishing one race from another rather then the biological status. For instance, Alberto Fujimori, the former president of Peru, was of Japanese ethnicity while he himself was born in Peru. Is he Peruvian because of the culture of his environment? If not, how could Peruvians vote for him as president, and consider him a Peruvian instead of a Japanese. Therefore, culture plays a much larger role when it comes to define race than ethnicity.

[for this paragraph, provide analysis of the significance of these observatons, and make this the most “dense” paragraph.] From the portrait, the readers can sense that future generation seems to agree with the idea that race is more related to culture instead of biological appearance. Hanna is a seven-year-old girl on the page 28 of the portrait. Through her beautiful green eyes and ever-present smile I can tell a life of happiness she is living. She has brown hair and darker eyebrows. Overall, she looks like a confident, happy little girl. I first identified her as a European by her physical appearance; however, she is a mixed of four family origins: Filipina, Yugoslavian, Norwegian, Irish. To the question posted by Fulbeck, she replies: “ I am American.” Clearly, she is one the Hapas who grew up in United States and considers herself as American because she lives here. [why is this significant? Does this symbolize a tendency for homogeny in the future] Besides Hanna, there are a lot of young kids in the portrait consider themselves as American instead of the “Hapa” race. They will eventually grow up, and carry on the United State traditions, such as Thanksgiving, 4th of July and so on. Most importantly, they are defining themselves as American according to themselves; and that will once again blur the absolute concept hidden in the word “race.”

According to the state law of Virginia in 1924, “a white person is one with no trace of the blood of another race, except that a person with one-sixteenth of the American Indian, if there is no other race mixture, may be classed as white” (The New Virginia Law). Considering myself a Chinese, if I were born in that era in which the definition of “race” is absolute, I would not be able receive proper education, and pursue my own happiness. Fortunately, I am born in this very period of the time that Kip Fulbeck’s project Part Asian 100% Hapa represents a new era where the concept of “race” becomes ambiguous, and more related to one’s culture and self-definition rather than…[try to shorten this sentence.] in your conclusion, you want to wrap-up the discussion and discuss the project of the book as it relates to your thesis.