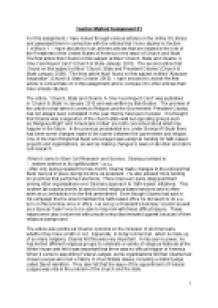 I have decided to look at three articles that are related to the role of the Presidents of the United States of America in the issue of Church and State.

I will begin the second part of this essay with a brief description of the two organisations mentioned in the article. The Religious Right group is primarily classed as a ?movement? rather than an organisation. It was set up in the late 1970s and is more commonly connected with a religious response to the sexual revolution and public policy. This includes issues such as abortion, Lesbian and Gay rights, and pornography. They are also concerned with the right for religious practices to be sponsored by the government. In contrast, Americans United is concerned with the separation of church and state, as portrayed in the constitution. It was founded in 1947 and has close ties to the White House as well as working closely with the courts. So how does this article relate to the other material that I have studied so far in this block? The most significant material to begin with here would be the Constitution of the United State of America. There are two amendments that relate to the relationship between church and state. The first amendment states that: ?Congress shall make no law respecting an establishment of religion or prohibiting the free activity thereof....? (1789) ...read more.

Since the constitution was brought into power, society has changed so much, as I have mentioned before, and the issue of the separation between church and state has changed depending on society and religion. Primarily, America has been thought of as a Christian nation, especially up until the Second World War, but this seems to have changed. This is even more evident in a speech highlighted in the Obama article, with Obama stating that: ?One of the great strengths of the United States is ... we have a very large Christian population, [yet] we do not consider ourselves a Christian nation or a Jewish nation or a Muslim nation.? (2010a) This may not be the case in today?s society but it is still seen as impossible to totally put a wall between religion and state. America is often seen as having a ?civil religion?. This is said to be a way in which the government can use religion as a rationale for their own religion. In this way, past presidents such as Washington and Lincoln are seen as the prophets and priests of this religion. In this respect, looking at the Obama article in this way, Obama seems to be trying to incorporate the multi-religious society of America into this civil religion. So how does Obama compare to Washington and Lincoln. Washington was said to be fundamental in the raise of Civil Religion. ...read more.