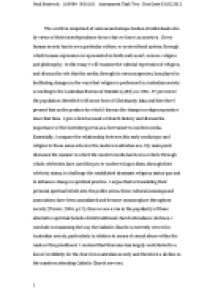 I will examine the cultural expression of religion, and discuss the role that the media, through its various agencies, has played in facilitating changes in the ways that religion is performed in Australian society.

﻿Paul Bestwick 118984 HGA101 Assessment Task Two Due Date 03.05.2012 The world is comprised of various and unique bodies of individuals who by virtue of their interdependence form what we know as societies. Every human society has its own particular culture, or sociocultural system, through which human expression is represented in fields such as art, science, religion and philosophy. In this essay I will examine the cultural expression of religion, and discuss the role that the media, through its various agencies, has played in facilitating changes in the ways that religion is performed in Australian society. According to the Australian Bureau of Statistics (ABS), in 1901, 97 percent of the population identified with some form of Christianity data and therefore I present that as the position by which I discuss the change in religious practice since that time. I give a brief account of church history and discuss the importance of the Gutenberg press as a forerunner to modern media. Essentially, I compare the relationship between this early media type and religion to those same actors in the modern Australian era. My main point discusses the manner in which the modern media has been a vehicle through which celebrities have used the power conferred upon them, through their celebrity status, to challenge the established dominant religious status quo and to influence change in spiritual practice. I argue that in translating their personal spiritual beliefs into the public arena, these cultural meanings and associations have been assimilated and ...read more.

36). Thus the evidence would suggest that the celebrity, in many cases, acts as a proxy for what would be considered bona fide spiritual authority. It could be argued that the adoption of these beliefs is inevitable for some individuals, who are by nature predisposed to automatic conformity to the suggestions of their celebrity heroes. Robert Cialdini postulates that, ?the ever accelerating pace and informational crush of modern life will make this form of unthinking compliance more and more prevalent in the future? (Cialdini, 2007, p. xiv). Essentially, he argues that with so much choice, it is easier to surrender such responsibility to a trusted confidante; in this case, the celebrity who the fan knows and trusts by virtue of their parasocial relationship. So for many, exposure to these belief systems may never have occurred had they not been transferred into the mainstream by their celebrity idols. Through this, we see demonstrated the way in which ?the media provide the basis from which we can gain knowledge and understanding of our contemporary environment, yet they are not passive conduits of communication? (eds. Marsden & Savigny 2009, p. 1). It is through the media, by virtue of their celebrity power, that these icons of society have strongly influenced their publics as their values have become normalised, and, in turn, appropriated, assimilated and thus integrated into the wider postmodern world. ...read more.

According to Flew (2002), global media involves internationalization of communication flows, transmitted through telecommunications, information and media technologies namely broadband cable, satellite and the internet which provide transnational circulation of cultural commodities, texts, images and artifacts. Flew, T. (2002) and it is via this medium, that societies across the globe have been impacted as a plethora of alternative ideas, which challenged many long held beliefs in societies whilst opening the way to the acceptance of new streams of thought. New Media: an Introduction . United Kingdom: Oxford University Press. Experts once predicted that as the world grew more modern, religion would decline. Precisely the opposite has proven true; religious movements are surging and driving "alternative globalizations" across the world. Where in times past, notions of God may have been associated with a cultural identity, these notions are now blurred The significance of the Enlightenment was not so much that it resulted in the complete disappearance of religion, but that religion became a matter of private choice, which then resulted in the withdrawal of religion into the private sphere. In the contemporary world, religion has become a matter of private taste, functioning in much the same way as do art and design. (Boris Groys: Religion in the age of digital representation?.http://www.e-flux.com/journal/religion-in-the-age-of-digital-reproduction/ So rather than doing religion as a practice driven by guilt or fear of persecution, religion has become a matter of choice, not unlike choosing a pair of jeans or a new car. In a world driven by consumerism? Passion of the Christ? speaking to their own narrative? perpetuating notions of punishment and reward. ...read more.