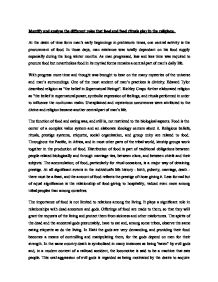 Identify and analyse the different roles that food and food rituals play in the religions.

Identify and analyse the different roles that food and food rituals play in the religions. At the dawn of time form man's early beginnings in prehistoric times, one central activity is the procurement of food. In those days, man existence was totally dependant on his food supply especially during the long winter months. As man progressed, less and less time was required to procure food but nevertheless food in its myriad forms remains a central part of man's daily life. With progress more time and thought was brought to bear on the many mysteries of the universe and man's surroundings. One of the most ancient of man's practices is divinity. Edward Tylor described religion as "the belief in Supernatural Beings". Richley Crapo further elaborated religion as "the belief in supernatural power, symbolic expression of feelings, and rituals performed in order to influence the nonhuman realm. Unexplained and mysterious occurrences were attributed to the divine and religion became another central part of man's life. The function of food and eating was, and still is, not restricted to the biological aspects. Food is the center of a complex value system and an elaborate ideology centers about it. Religious beliefs, rituals, prestige systems, etiquette, social organization, and group unity are related to food. ...read more.

Allowable meats must be slaughtered in a specific manner to prevent undue suffering and then treated with cold water and coarse salt to draw out the blood. Fish with fins and scales are kosher, but shellfish, shark, sea mammals, frog, turtle and octopus are prohibited. Birds raised for meat is kosher if prepared under the supervision of a rabbi. Wild birds are prohibited. Animal by-products, such as eggs, are permitted if they come from a kosher species. Dairy products are kosher, but they must be kept separate from meat to maintain a biblical prohibition that a "kid cannot be cooked in its mother's milk." Eggs may be eaten with either milk or meat. In her book, "The Foods of Israel Today," author Joan Nathan explains that in the ancient land of Israel, all Jews used olive oil as the main cooking oil. But as they moved into countries in Northern and Eastern Europe, olive oil was hard to come by, so they had to rely on butter and beef and poultry fats because lard (pork fat) was prohibited. Jewish feast days include Rosh Hashanah, Hanukkah, Passover, and Shavout whose dates vary because Judaism uses a lunar calendar. Specific foods are associated with the feasts. Complete fast days with no food or water from sunset to sunset include Yom Kippur and Tisha b'Av. ...read more.

Some believe that unless they personally slaughter an animal, they may eat its meat. Some of these practices are required by the God and described in scriptures such as the Christian Bible, the Muslim Quran and Hindu Code of Manu. Some are decreed by religious or political leaders. Yet others arise through adaptation or co-option of existing food practices for religious purposes. Religious food practices are dynamic and are subject to continuous change and adaptation. Changes may occur as result of religious reform or revisionism, acculturation, individual, family or community adaptations. In conclusion, it can be seen that FOOD in all its myriad forms is present in all major religions. It is represented as Food itself for sustenance; as symbols that convey issues and morals; as representations of sacrifice and piety. Throughout all religions, Food -- essential to the life of the body -- takes on symbolic meanings for the life of the soul. References Leopold, Joan Culture in Comparative and Evolutionary Perspective: E. B. Tylor and the Making of Primitive Culture. (Berlin: Dietrich Reimer Verlag, 1980) Crapo, Richley H. Anthropology of Religion: The Unity and Diversity of Religions (2003) Fieldhouse P. Food and Nutrition: Customs and Culture. (1986) Booth, D.A. Psychology of Nutrition. Taylor & Francis, London. (1994) Bryant, C.A. The Cultural Feast: An Introduction to Food and Society. Courtney, A. Markesbery, B.A. & DeWalt, K.M. Soler, J. The semiotics of food in the Bible. ...read more.