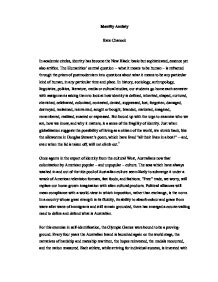 Identity Anxiety Kate Chanock In academic circles, identity has become the New Black: basic but sophisticated, essence yet also artifice. The Humanities' central question -- what it means to be human - is refracted through the prism of postmodernism into questions about what it means to be any particular kind of human, in any particular time and place. In history, sociology, anthropology, linguistics, politics, literature, media or cultural studies, our students go home each semester with assignments asking them to look at how identity is defined, inherited, shaped, nurtured, cherished, celebrated, colonized, contested, denied, suppressed, lost, forgotten, damaged, destroyed, reclaimed, reinvented, sought or bought, branded, marketed, imagined, remembered, realized, enacted or expressed. But bound up with the urge to examine who we are, how we know, and why it matters, is a sense of the fragility of identity. Just when globalization suggests the possibility of living as a citizen of the world, we shrink back, like the silkworms in Douglas Stewart's poem, which have lived "all their lives in a box!" -- and, even when the lid is taken off, will not climb out.1 Once agents in the export of identity from the cultural West, Australians now fear colonization by American popular - and unpopular - culture. ...read more.

First there was Big Brother, with its ugly spectacle of bonding around the exclusion of a member of the community each week. I felt that this was unAustralian, though it echoed the milieu my children had encountered as puberty set in. I could not say that it was foreign to the culture, but it made the peculiarly disturbing world of adolescent girls into an acceptable norm for people of every age. Australians were transfixed, and I was worried. And yet, the worst that could happen didn't. The contestants became, in their own bizarre way, Australian mates. It happened again on Australian Idol, when those with the most at stake developed a generous affection for one another as the climax approached. These "games" are proliferating as fast as anybody can come up with an angle; is it possible that Australians can continue to naturalise these rituals of exclusion? What is needed is a robust sense of proportion, and that is not easy to come by in a country where the have-nots are mercifully few by world standards, and small stakes can therefore seem unnaturally large. It was such a distortion of proportion that we saw in the Olympic Games in Athens. ...read more.

Whether games or battles, these are always going to be about ranking, splitting and winning. If this undermines the things we most like about ourselves, we would do better to climb over the edge of our box and look at what makes us the same as everybody else, in every other time and place. It is perhaps five thousand years since Gilgamesh, the hero of the epic of Sumer (now Iraq), was advised to accept that he would never find the secret of immortality and should, instead, "cherish the little child that holds your hand, and make your wife happy in your embrace; for this ... is the lot of man".4 It is the lot of people everywhere; and if we devoted ourselves to safeguarding this modest ideal, not just for ourselves but for our neighbours, we would have less cause to be anxious about our own identity. 1 D. Stewart, "The Silkworms", in The Penguin Book of Australian Verse, eds. J. Thompson, K. Slessor and R.G. Howarth (Harmondsworth: Penguin, 1958), 183-184. 2 A. Stevenson, "The Odd Australian Out", Age 28 August 2004, Insight 3. 3 Stevenson, Insight 3. 4 N.K. Sandars, ed. and trans., The Epic of Gilgamesh, 2nd Edition (Harmondsworth: Penguin, 1972), 102. ...read more.