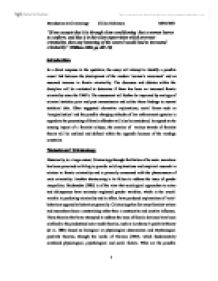 &quot;If one accepts that it is through close conditioning that a women learns to conform, and that it is this close supervision w

"If one accepts that it is through close conditioning that a women learns to conform, and that it is this close supervision which prevents criminality, then any lessening of the control would lead to increased criminality" (Williams 2004, pp. 469-70) Introduction In a direct response to the quotation, the essay will attempt to identify a possible causal link between the development of the modern 'women's movement' and an assumed increase in female criminality. The discourse and debates within the discipline will be evaluated to determine if there has been an increased female criminality since the 1960's. The assessment will further be improved by analogy of criminal statistics prior and post manumission and collate those findings to current statistical data. Other suggested alternative explanations, social forces such as 'marginalisation' and the possible changing attitudes of law enforcement agencies in regards to the processing of female offenders will also be considered. In regards to the ensuing impact of a feminist critique, the creation of various strands of feminist theory will be outlined and defined within the appendix because of the wordage constraint. 'Malestream' Criminology Historically, to a large extent, Criminology through facilitation of its meta- narratives has been perceived as failing to provide valid explanations and empirical research in relation to female criminality and is primarily concerned with the phenomenon of male criminality. Another shortcoming is its failure to address the issue of gender inequalities. Heidensohn (1985) is of the view that sociological approaches to crime and delinquency have seriously neglected gender variables, which is the crucial variable in predicting criminality and in effect, have produced explanations of 'male' behaviour opposed to behaviour generally. Criminology has for many feminist writers and researchers been a constraining rather than a constructive and creative influence. Those theories that have attempted to address the issue of female deviance have been confined to the predestined actor model theories, such as Lombroso's positivist theory (et al, 1885) ...read more.

Also, as women are 'climbing up the corporate business ladder', they are making use of their 'vocational liberation' to pursue careers in white-collar crime. A practical example of which can be seen in the high profile case of Joyti De-Laurey, Goldman Sachs secretary who stole �4.5m from her employer. She plundered her bosses' private bank accounts by forging their signatures and writing cheques to herself and spent it all on a lavish lifestyle of diamonds, designer labels and fast car. Adler in a later study commented, "Women would naturally wish to emulate male patterns in criminality and would adopt masculine roles to do so" (Adler, 1977). She discovered that in the United States, between 1960 and 1972, robberies committed by women rose by 277%, in comparison to a 169% increase in male robberies, embezzlement by women rose by 280%, whereas for men the figure rose by 50%. Overall, arrest rates for females were rising three times as fast as those for males and particularly quickly amongst female delinquents (cited in Harralambos et al, 1995, pp 438:5). The statistical support for Adler's theory was based on a comparison of rates of offending among genders for the period 1960 to 1972 using U.S. Uniform Crime Report (UCR) arrest data (Adler, 1975, pp 15-16). . But what evidence exists to support the 'liberation thesis? As crime is generally linked to 'poverty', and that "Women are the poorest of all in our society" (Booth, 1985: 9), would 'feminism' not lead to less crime being committed by women, as the options for employment increase? Another criticism is her over reliance on official criminal statistics which are notoriously problematic. Recorded crime statistics only include those offences dealt with by the criminal justice system. Many offences are never reported to the police, especially 'white-collar' crimes which remain largely hidden, of those that are, a substantial proportion are not cleared up. Smart (1976) ...read more.

The maturation and impact of the modern 'women's movement' has undoubtedly influenced and altered the social control of women and has produced changes in their behaviour and the way in which they are processed within the criminal justice system. Although, there was a clear argument that refutes the effect liberation has had on the emancipation of lower-classes females. The increase in female crime is more practically explained as a result of economic marginalisation through unemployment, divorce or separation from a partner. Consideration must also be applied to the way in which female crimes, especially those of a serious nature arouse the greatest publicity and controversy, despite the obvious small amount in ratio to male crime. Appendix 1 The Various Feminist Theories 1. Liberal Feminism- This perspective is essentially concerned with equal rights and opportunities for women by demonstrating how women are being ignored and has primarily concentrated on sex differentials in crime and discrimination practices in the criminal justice system in its research. 2. Radical Feminism- This perspective focuses on the oppression of women by men and examines how women came to occupy subservient roles within society by focusing on their physiology (the necessity to bear children). For Radical Feminist Criminologists, the only way to understand crime is to see it through a female perspective. 3. Socialist Feminism- This perspective views oppression as rooted in patriarchal capitalism. They support practical action to improve the position of women's lives on an everyday basis. 4. Post-modern Feminism- Its approach is broadly 'deconstructionist'. Writers such as Carol Smart (1990) proposed that the very concerns of Criminology (Burglary, street crime, etc) are actually a reflection of male concerns and that women should be looking beyond those to consider how harm comes to women. It is also opposed to accepting the 'male' boundaries that other theories offer. 5. Marxist Feminism- This approach views 'patriarchal ideology', male domination and female subordination as developing out of the relations produced by the capitalist system. For Marxist Feminists, we need to rid society of capitalism and then gender inequalities will also be remedied. ...read more.