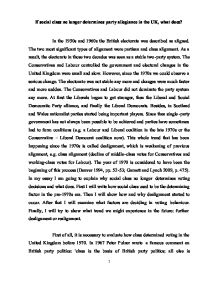 If social class no longer determines party allegiance in the UK, what does?

If social class no longer determines party allegiance in the UK, what does? In the 1950s and 1960s the British electorate was described as aligned. The two most significant types of alignment were partisan and class alignment. As a result, the electorate in those two decades was seen as a stable two-party system. The Conservatives and Labour controlled the government and electoral changes in the United Kingdom were small and slow. However, since the 1970s we could observe a serious change. The electorate was not stable any more and changes were much faster and more sudden. The Conservatives and Labour did not dominate the party system any more. At first the Liberals began to get stronger, then the Liberal and Social Democratic Party alliance, and finally the Liberal Democrats. Besides, in Scotland and Wales nationalist parties started being important players. Since then single-party government has not always been possible to be achieved and parties have sometimes had to form coalitions (e.g. a Labour and Liberal coalition in the late 1970s or the Conservative - Liberal Democrat coalition now). This whole trend that has been happening since the 1970s is called dealignment, which is weakening of previous alignment, e.g. class alignment (decline of middle-class votes for Conservatives and working-class votes for Labour). ...read more.

According to Alford's Index, which measures class voting by finding the difference between percentage of Labour's working-class and middle-class votes, in the elections in the 1960s the score was 42 and 43 (the higher the score, the stronger class voting). However, in 1970 it fell to 33, then to 27 in 1979 and again to 21 in 1983. Another way of measuring class voting is finding the difference between the number of non-manual Conservative and manual Labour voters. In 1959 the proportion was 65 per cent, it dropped to 60 per cent in 1970 and finally to 47 per cent in 1983. Thus as we can see, class voting still existed but it was much less visible. Percentage of non-manual Conservative vote fell from 69 to 58 between 1959 and 1983, and manual Labour's vote dropped from 62 per cent to 38 per cent in the same period of time (pp. 183-215 in: Denver and Hands 1992, pp. 61-63). One of the factors determining voting are issues. Issue voting means that people decide who to vote for by comparing the parties' policies on the most important issues. In the 1997, 2001 and 2005 elections, which Labour won, they led over the Conservatives in opinion polls on most of the key issues. ...read more.

For instance, the Labour party won the 1997 election because people thought that they were more competent and because the Conservative government was judged poorly. However, Labour won the 2005 election even though voters were not satisfied with Tony Blair's government. It happened though because they did not believe that the Conservatives had prepared good policies and that they had a professional attitude to rule the country (Garnett and Lynch 2009, pp. 490-491). In my essay I tried to prove that as a result of the process of dealignment class does no longer determine party choice. It used to be a deciding factor in the 1950s and the 1960s but since 1970 it significantly declined. Today other aspects cause party allegiance. The first one that I mentioned is issue voting. People tend to vote for the party that according to them have proposed better and more successful policies. Another important factor are party leaders. It is not deciding but still very helpful if a party has a popular leader. The media is argued by many to have an influence on voting behaviour, too. People are thought to be especially affected by the press and, most importantly, television. Also the state of the economy determines how people vote. If the economy is in a good condition, people are more likely to vote for the ruling party, and vice versa. Finally I described judgemental voting, which means that people base their decision upon the ruling party's performance. ...read more.