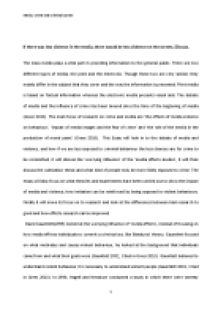 ﻿Media, Crime and Criminal Justice If there was less violence in the media, there would be less violence on the streets. Discuss. The mass media plays a vital part in providing information to the general public. There are two different types of media, the print and the electronic. Though these two are very similar, they mainly differ in the subject that they cover and the way the information is presented. Print media is based on factual information whereas the electronic media presents visual aids. The debate of media and the influence of crime has been around since the time of the beginning of media (Greer 2010). The main focus of research on crime and media are ?the effects of media violence on behaviour?, ?impact of media images and the fear of crime? and ?the role of the media in the production of moral panic? (Greer 2010). This Essay will look in to the debate of media and violence, and how if we are less exposed to criminal behaviour the less chances are for crime to be committed, it will discuss the ?worrying influence? of the ?media effects studies?, it will then discuss the cultivation thesis and what kind of people may be more likely exposed to crime. The essay will also focus on what theories and experiments have been carried out to show the impact of media and violence, how imitation can be reinforced by being exposed to violent behaviours. Finally it will move its focus on to research and look at the differences between bad research to good and how effects research can be improved. ...read more.

Watching something violent does not cause a person to do the same thing, if this was the case then the majority of population would be deviant, mainstream society is pretty much exposed to the media in everyday life, watching TV, newspapers, radio and even mobile phones, if the media influenced behaviour then the result of this would be clearly seen in society. Gauntlett believes that the ?effects model? is based on a mixture of statements and the considerable problems lie in the ?failure? of the ?media effects? theorists who base their research on any theory (Gauntlett 2001, Cited in Greer 2010). Gerbner and Gross (1976) argue that television is the main source to understanding the world around us; this is explained in their cultivation theory. According to Gerbner and Gross, the main purpose of media is to ?reinforce? and not face up to those in power (Gerbner and Gross 1976, Cited in Greer 2010). Overtime the influence of media has been increasing and has created a particular view of the world (Gerbner and Gross 1976, Cited in Greer 2010). From all the types of media, Television has become the main source of storytelling in society (Gerbner and Gross 1976, Cited in Greer 2010). According to Gerbners cultivation theory, individuals who view TV for more than four to five hours a day are regarded as as ?heavy television viewers? and individuals who watch less than four hours of TV are categorised as ?light viewers? therefore are less likely to be exposed to violent behaviour?, heavy viewers? of television are more exposed to violence and ...read more.

In the work of Schlesinger et al, it can be seen that it is not being exposed to violence that results in an imitated behaviour but more of the ?feelings? that are created when being exposed to this, so actual or possible victims of crime (Barker and Petley 2001, Cited in Greer 2010). He came to this conclusion from his research on ?women viewing violence?, this study concentrated on the reaction of women who watched four different types programmes, this included, BBC Crime Watch UK, a popular soap, Eastenders, drama, Closing Ranks and lastly a film called, The Accused. The women came from different ages, cultural backgrounds and class (Barker and Petley 2001, Cited in Greer 2010). It can be argued that the more variety of people in a research the better the research will be. If there is more concentration on a particular group of people then the outcome of the research will be weak. In conclusion, the connection between media and crime has been based on the ?media effects research? where experiments have been conducted mainly on the younger audience; if experiments are conducted on a broader scale by having a wider audience from different backgrounds, age and class, we are able to have a better understanding and a result in then connection between Media and Crime on society as a whole, we are exposed to criminal behaviour daily, through the media and the real world, it cannot be stated that the less violence in media then the less it would be on the streets, this issue has been around for many years and in time only better research would be able to help in understanding this debate. ...read more.