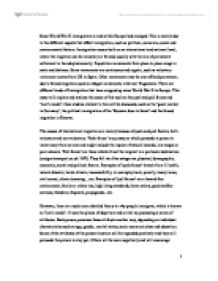 Immigration. There are different kinds of Immigration that have cropped up since World War II in Europe. This essay will explain and analyse the cause of this such as the push and pull forces and Lees model.

Since World War II immigration to and within Europe had emerged. This is mainly due to the different aspects that affect immigration, such as political, economic, social and environmental factors. Immigration occurs both on an international and national level, where the migration can be voluntary or forced; usually with the aim of permanent settlement in the adopted country. Population movements from place to place range in scale and distance. Some movements are continuous and regular, such as voluntary retirement moves from UK to Spain. Other movements may be one-off and permanent, due to forced migration such as refugee movements in former Yugoslavia. There are different kinds of Immigration that have cropped up since World War II in Europe. This essay will explain and analyse the cause of this such as the push and pull forces and 'Lee's model'. Case studies relevant to this will be discussed, such as the 'guest worker in Germany', the political immigration of the 'Russian Jews to Isreal' and the forced migration in Kosovo. The causes of international migration are mainly because of push and pull factors; both voluntary and non-voluntary. 'Push forces' are pressures which persuade a person to move away from an area and might include the impact of natural hazards, low wages or poor schools. 'Pull forces' are those which attract the migrant to a particular destination. (emigrationexpert.co.uk: N/D). They fall into five categories: physical, demographic, economic, social and political factors. ...read more.

Neo-Nazis also want to use the tournament to raise their profile (Spiegel.de: 2006)". On the economic and social factors, statistics show that since the continuous and rapid increase of foreigners from 1992 to 1995 which raised the population of Germany by 3% which is approximately 2.4 million (Theodora.com: 2007), at the same time unemployment had also increased from 6% to 9% (Chapin, 1997, figure 3.1). This shows a clear pattern, due to the explosion of foreigners- mainly immigrants- the result was a large cost for the German economy. Because of this it had created many black markets and criminal activity; coincidently with the population erupting from around 1987, crime had also increased by 20% (photius.com: 2004). However these figures are may be vague, invalid and based on assumption. But the facts remain that immigrants and foreigners have created an upset to the German economy and population. Immigration since the 1980s was still expanding rapidly. The largest category was family reunion (60%) in some countries. The EU estimated that 4 to 7 million 'illegal migrants' arrived to Europe in the mid-1980s. In Italy, there was an increase of 300,000 in the mid-1980s to 1.25million in 1998. However these are just assumptions since there is no count for an illegal emigrant. So why was there an increase in asylum seekers, illegal migrants? It can be argued that this is due to the end of the 'Cold War', regional conflicts, or more labour market requirements for low-skilled workers. ...read more.

Just as there is a secular tendency of rich countries to shift their productive specialisation from agriculture and manufacturing into services, there is also a shift in the productive specialisation of western economies within the service sector. As education and average age increase, rich economies specialise in services concentrated in managerial and analytical skills rather than manual and physical ones. So in conclusion, even if income per capita enhances, rich economies still demand personal services using manual and physical skills. At the same time, close neighbours of Western Europe, such as countries in North Africa, the Middle East and in part of Eastern Europe, have younger, less educated labour forces potentially attracted by the higher productivity and wages of Western Europe. The possible 'gains from trade' look obvious, older educated Western Europeans should specialise in human capital intensive services (education, finance, health care, business services and research) and 'outsource' some of the personal, manual-intensive services (health aides, personal care, food preparation, transportation, construction) to younger, less educated foreigners. The issue is that, as those services are 'non-traded', such outsourcing would require less educated, younger foreigners to be allowed to work in Western Europe. Immigration, in a word, would be the way to reap the benefits from specialization; benefiting both the host country and the migrants. But even the mention of greater mobility across borders produces very strong and alarmed reactions; not from just a few eccentric politicians but the general public in most of Western Europe (voxeu.org: 2008). ...read more.