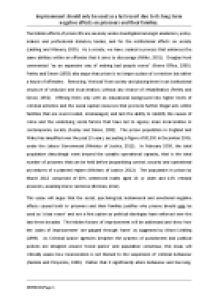 Imprisonment should only be used as a last resort due to its long-term negative effects on prisoners and their families.

﻿Imprisonment should only be used as a last resort due to its long-term negative effects on prisoners and their families. ________________ The hidden effects of prison life are severely under-investigated amongst academics, policy-makers and professional statutory bodies, and for the institutional effects on society (Liebling and Maruna, 2005). As a society, we have created a process that enhances the same abilities within an offender that it aims to discourage (Miller, 2001). Douglas Hurd commented ?as an expensive way of making bad people worse? (Home Office, 1990). Feeley and Simon (1992) also argue that prison is no longer a place of correction but rather a house of offenders. Removing, ?the bad? from society and placing them in an institutional structure of seclusion and incarceration; without any chance of rehabilitation (Feeley and Simon, 1992). Offering them only with an educational background into higher levels of criminal activities and the social capital resources that promote further illegal acts within facilities that are overcrowded, mismanaged, and lack the ability to identify the causes of crime and the underlying social factors that have led to agency mass incarceration in contemporary society (Feeley and Simon, 1992). The prison population in England and Wales has amplified over the past 10 years, exceeding a figure of 80,000 in December 2006, under the Labour Government (Ministry of Justice, 2012). In February 2008, the total population disturbingly went beyond the useable operational capacity; that is the total number of prisoners that can be held before jeopardising control, security and operational procedures of a planned regime (Ministry of Justice, 2012). The population in prison by March 2012 comprised of 80% sentenced males aged 18 or older and 14% remand prisoners, awaiting trial or sentence (Berman, 2012). This essay will argue that the social, psychological, behavioural and emotional negative effects caused both to prisoners and their families justifies why prisons should only be used as ?a last resort? and not a first option as political ideologies have enforced over the last three decades. ...read more.

The conditions and the loss referred to by Sykes (1958) as ?pains of imprisonment? and include the deprivation of autonomy. This deprivation has grown dramatically due to the over-reliance on prisons as a matter of punishment. The recent reforms in prison and the introduction of privilege systems have led to certain conditions that were once part of prison life now being treated as matters of privilege, that can be withdrawn at will of the prison officer; each year these restrictions are increased without reason (Toch, 2002). Within the current prison culture there is also a tendency for prisoners developing a drug addiction whilst in prison, a report by Nick Hardwick, the Chief Inspector of Prisons in April 2012, highlighted the seriousness of drugs along with the limited work provision and training opportunities within HMP Wolds, a privatised prison run by G4S (Hardwick, 2012). These policies created by non-incarcerated individuals are used as a matter of control and order, although they can have dramatic consequences for both the prisoners and their families and can have negative effects within the structure and management as a matter of course. Research is notably lacking into the long-term negative effects of imprisonment and the hidden factors of the psychological and emotional damage it causes (Grounds, 2004). Regardless of the recognition of these effects by the Home Office (1991) in the White Paper, Custody, Care and Justice; where a prisoner?s recognition of their responsibility is reduced through imprisonment and subsequently what is essentially recognised by society in a law abiding citizenship lost; reintroduction into society often occurs without thought or consideration to the effects both on the prisoner, their families and society. There is now a recognition of disorders developed whilst incarcerated; Post Incarceration Syndrome (PICS) is a set of symptoms present in incarcerated and recently released prisoners with little education of rehabilitation opportunities (Ditton, 1999). This syndrome is coherently mixed with a constellation of added symptoms; institutionalised personality traits, from deprivations of incarceration; post-traumatic stress disorder, both pre and ...read more.

With rates of unemployment of ex-prisoners as high as 50%, the consequential social exclusion aspect then becomes inherently worse, leading to an increase in re-offending and the subsequent raise is crime rate figures (Metcalf et al, 2001). This is also apparent on discovery, after secured employment, where hidden convictions may lead to dismissal, regardless of their ability to perform; regardless of the discriminatory attitudes against ex-prisoners and regardless of the needs of society to include such individuals (Metcalf et al, 2001). In concluding the negative long-term effects of incarceration, there is a degree of irony within a system that obviously, as described has severe imbalances of power. Effects of imprisonment are extensive and not only affect the prisoners, but disperse throughout the family; intergenerational, community and societal negativity which has created boundaries, from the prisoners perspective, their family and throughout society. The punitive system has driven forward an increased population within prisons, and therefore is required to deal with the outcomes and the catalyst of their creation. In understanding imprisonment, there is the ultimate question, of who benefits from the current state of criminal justice? Moving forward needs a triumvirate approach, recognising why there is a failure to implement policies that work in reducing crime, identifying the harms caused by the elite and dismantling the bias that exists ultimately in a criminal justice system that inflicts wrong on the poor within society (Reiman, 1995). Political and social factors are ignored and mass incarceration continues which inevitably is inherited by any political system that supersedes. The pains of imprisonment and the causation of many negative effects tend to be ignored and although evidence compounds the negativity, society does not seem to address the adversity upon a society they so tend to protect. Political positions still voice the typology in addressing crime rates, regardless of the reduction in them compared to incarceration. Families and individuals are now experiencing a wide spread undesirable, damaging and long lasting effect both upon them and society as a whole. ...read more.