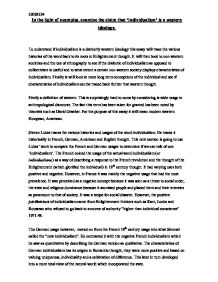 In light of examples, examine the claim that individualism is a Western ideology

In the light of examples, examine the claim that 'individualism' is a western ideology. To understand if individualism is a distinctly western ideology this essay will trace the various histories of the word back to its roots in Enlightenment thought. It will then look to non-western societies and the use of ethnography to see if the dialectic of individualism as opposed to collectivism is useful and to what extent a certain non-western society displays characteristics of individualism. Finally is will look at more long term conceptions of the individual and see if characteristics of individualism can be traced back further that western thought. Firstly a definition of western. This is surprisingly hard to come by considering is wide usage in anthropological discourse. The fact this term has been taken for granted has been noted by theorists such as David Graeber. For the purpose of this essay it will mean modern western European, American. Steven Lukes traces the various histories and usages of the word individualism. He traces it historically in French, German, American and English thought. This next section is going to use Lukes' work to compare the French and German usages to determine if we can talk of one 'individualism'. The French coined the usage of the actual word individualism (or individualisme) as a way of describing a response to the French revolution and the thought of the Enlightenment (which glorified the individual) ...read more.

This is further evidence for the case that it is unhelpful to label societies as based on individualism or collectivism as there are here again elements of individualism shown in societies that are have been portrayed historically collectivist. This essay has shown, through the work of Lukes, that it cannot be said that there is one type of individualism, there are many, this was demonstrated using the contrasting examples of French and German individualism. Therefore, it may be more appropriate to speak of western individualisms. It has also shown that through Lienhard's analysis of West African Youruba folk tales that these conceptions of individualism have been found in distinctly non-Western cultures. This is not to say that individualism is the dominant ideology in this West African culture but it challenges the dichotomy of individualistic and collectivistic culture between the west and the rest to suggest that it could be more a sliding scale of individualistic and collectivistic tendencies rather than a black and white picture of either or. Further evidence for this is displayed in Alan MacFarlane's work, which has traced attitudes associated with individualism back to what is commonly portrayed as collectivist feudal England. This could be a point for further research, to determine to what extent so called western societies display characteristics of collectivism, research could focus on families and in particular extended-families. Other sites for further research could see if globalisation and the spread of western culture and capitalism has impacted upon non-western societies that are traditionally described as collectivist societies. ...read more.