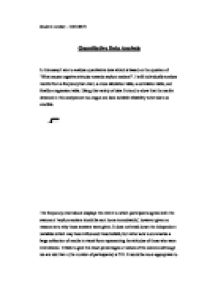 In this essay I aim to analyse quantitative data which is based on the question of What causes negative attitudes towards asylum seekers?

Student number - 110118471 Quantitative Data Analysis In this essay I aim to analyse quantitative data which is based on the question of 'What causes negative attitudes towards asylum seekers?'. I will individually analyse results from a frequency bar chart, a cross-tabulation table, a correlation table, and finally a regression table. Using this variety of data I intend to show that the results obtained in this analysis are too vague and lack suitable reliability to be taken as credible. The frequency chart above displays the extent to which participants agreed with the statement 'asylum seekers should be sent home immediately', however gives no reasons as to why those answers were given. It does not break down the independent variables which may have influenced these beliefs, but rather acts to summarise a large collection of results in visual form representing the attitudes of those who were interviewed. It fails to give the exact percentages or values of the columns although we are told that n (the number of participants) is 712. It would be more appropriate to then display numerically how many people opted for which answer. ...read more.

It would be interesting to see a comparison between current age of participants and the age they finished education to see whether it was increased education that changes viewpoints or just the society participants grew up in. These cross tabulations do not explain the causality between the two variables. However, the use of a source as the 'British Electoral Study 2005' as well as the great significance score of p<0.01 act to give the results credibility as reliable and definite. Correlation test between attitudes towards asylum seekers and immigrants in general Correlation coefficient 0.551 (**) Significance: p <0.01 The correlation table above addresses the potential relationship between negative attitudes towards asylum seekers and negative attitudes to immigrant in general. The two variables that are examined are the views on whether 'asylum seekers should be sent home immediately' and whether 'immigrants increase crime rates'. The positive correlation of 0.551, which should be seen as reasonably strong suggests that there is a moderate positive link between the variables. The fact that the correlation coefficient is followed by two asterisks, shows the result is very significant. ...read more.

This is a low percentage and one that could be improved with the addition of more independent variables. To conclude, when analysing what we have found out about the dependent variable it appears that very little knowledge has actually been gained. To summarize, the data is not precise enough and although this may be seen as a general characteristic of quantitative analysis it is exacerbated in these statistics due to a lack of specificity. The fact that 20% of people opted for 'neither agree nor disagree' as their answer suggests that the question was not clear enough. For example, it is not explained what actions 'strongly agree' or 'agree' entail and so for one person the actions that might be categorised by the answer 'strongly agree' might be categorised by just 'agree' for another participant. Moreover there is no room for participants to distinguish between a deserving immigrant who is possibly fleeing persecution and an undeserving immigrant who merely seeks government welfare which could also explain why 20% opted to 'neither agree nor disagree'. Furthermore as has been addressed earlier the data fails to provide any causality, therefore although we learn that school leaving age has an impact on the attitudes towards asylum seekers, it is left open to why this is the case. ...read more.