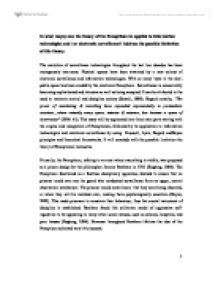 In what way(s) can the theory of the Panopticon be applied to information technologies and / or electronic surveillance? Address the possible limitation of this theory.

In what way(s) can the theory of the Panopticon be applied to information technologies and / or electronic surveillance? Address the possible limitation of this theory. The evolution of surveillance technologies throughout the last two decades has been outrageously enormous. Physical spaces have been swarmed by a new colony of electronic surveillance and information technologies. With so many 'eyes in the sky[AS1]', public space has been eroded by the electronic Panopticon[AS2]. Surveillance is concurrently becoming sophisticated and intrusive as well as being accepted. It can be attributed to the need to maintain control and to discipline society (Sewell, 1999). Bogard remarks, "The power of monitoring & recording have expanded exponentially in postmodern socitiessocieties...where virtually every space, interior & exterior, has become a space of observation" (2006: 61). This essay will look more in depth at today's modern electronic panoptical society. It will be segmented into three main parts starting with the origins and recognition of Panopticism, followed by its application to information technologies and electronic surveillance by using the academic works of Foucault, Lyon, Bogard and, Boyne principles and theoretical frameworks to explain, and . It will concludefinishing with the possible limitation the theory of Panopticism insinuates. FirstPrimarily, the Panopticon, meaning anrefering to an area where everything all is visible, was proposed as a prison design by the philosopher Jeremy Bentham in 1791 (Engberg, 1996). The Panopticon functioned as a the perfectfaultless disciplinary apparatus, devised to ensure that no prisoner could ever see the guard who conducted surveillance from the privilegedan upper, central observation watchtower. The prisoner would never know that they were on no account knew when they were being observed, or when they will be watched over, which mademaking them mentallypsychologically uncertain[AS3] (Boyne, 2000). ...read more.

James Rule's (1973) outlook of electronic surveillance also has an Orwell vision, which can be viewed as a system that "would work to enforce compliance with a uniform set of norms governing every aspect of everyone's behaviour. Every action of every person would be scruitinised, recorded, evaluated both at the moment of occurrence and forever afterwards. Any sign of disobedience, present or anticipated, would result in corrective action" (cited in Sewell, 1999: 4). Orwell's analysis of technology surveillance and information was somewhat a mental plague that is forced upon our humanity in order to be manipulated by the influential to conform to what suits them best (Lyon, 1994). However things have changed since Orwell's times and it can be seen that some of his work has been outdated. It is well past 1984 and electronic surveillance has grown strong and reached global lengths where it is not only a government apparatus, but also a private one as well. People are even using the electronic surveillance to protect their privacy and right to security. Companies also have caught up with the use of information technologies and electronic surveillance in the name of consumption (Lyon, 1994). Nonetheless Orwell's account and work must be acknowledged as it delivers an insightful point. To a certain extent, the Panopticon provides a much more constructive understanding of information technologies and electronic surveillance. Lyon perceives the Panopticon as an alternative to Big Brother and that its panoptic principle was to anticipate for a utopia scheme in support of a social reform (Lyon, 1994). Subtler and less coercive methods have become increasingly well known in the advance societies, the argument is that this is due to the social control the panoptic power generates (Lyon, 1994). ...read more.