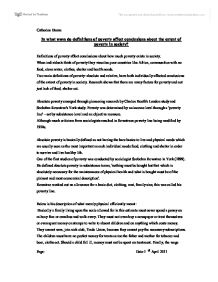 In what ways do definitions of poverty affect conclusions about the extent of poverty in society?

In what ways do definitions of poverty affect conclusions about the extent of poverty in society?

Definitions of poverty affect conclusions about how much poverty exists in society.

When individuals think of poverty they visualise poor countries like Africa, communities with no food, clean water, clothes, shelter and health needs.

Two main definitions of poverty: absolute and relative, have both individually affected conclusions of the extent of poverty in society. Research shows that there are many factors for poverty and not just lack of food, shelter ect.

Absolute poverty emerged through pioneering research by Charles Booth's London study and Seebohm Rowntree's York study. Poverty was determined by an income level through a 'poverty line' – set by subsistence level and an objective measure.

Although much criticism from sociologists resulted in Rowntrees poverty line being modified by 1930s.

Absolute poverty is basically defined as not having the bare basics to live and physical needs which are usually seen as the most important as each individual needs food, clothing and shelter in order to survive and live healthy life.

One of the first studies of poverty was conducted by sociologist Seebohm Rowntree in York (1899).

He defined absolute poverty in subsistence terms, 'nothing must be bought but that which is absolutely necessary for the maintenances of physical health and what is bought must be of the plainest and most economical description'.

Rowntree worked out an allowance for a basic diet, clothing, rent, family size; this was called his poverty line.

Below is his description of what merely physical efficiently meant:

Basically a family living upon the scale allowed for in this estimate must never spend a penny on railway fare or omnibus and walk every. They must not even buy a newspaper or treat themselves or even spent money on stamps to write to absent children and on anything which costs money. They cannot save, join sick club, Trade Union, because they cannot pay the necessary subscriptions. The children must have no pocket money for treats as too the father and mother for tobacco and beer, cloths ect. Should a child fall ill, money must not be spent on treatment. Finally, the wage earner must never be absent from his work for a single day.

1936 and 1.5% in 1950. This would have us conclude that poverty is low and that only homeless individuals in society are in poverty, due to lack of food, clothing and shelter.

Advantages of this definition of poverty, is that is absolutely clear and does not relay upon people's opinions about what is poverty.

It also allows comparisons across societies and provides a set and universal definition, which can be used for measuring and comparing poverty in all societies.

Its disadvantages would include firstly, the absent account that poverty itself changes over time which changes the definition of poverty. Ones needs, necessities and essentials vary from time to time and place to place. Human’s needs are culturally defined.

Human needs cannot be measured, as a bigger built male working on a building site, may need to consume more calories than another male in a less active job sitting behind a desk. Theses physical, social and occupation factors should be taken into account as they can also play big role in our conclusion to poverty.

This definition suggests that a person is in poverty if they have less than the normally accepted minimum standard in their society. For example the 'norms' and 'values' of society would be: having accommodation with electricity, warm and cold water, indoor toilet and shower. Relative poverty's definition would suggest that without these essentials, the individual is living in poverty.

In Britain sociologist, Peter Townsend defines poverty in terms of relative deprivation as follows: “Individuals, families and groups in the population can be said to be in poverty when they lack the resources to obtain the types of diet, participate in the activities and have the living conditions and amenities which are customary, or at least widely encouraged or approved in the societies to which they belong. Their resources are so seriously below those commanded by the average individual or family that they are, in effect, excluded from the ordinary livingpatterns, customs and activities. (P. Townsend) 1996.

To ‘objectify’ this measure of poverty, Townsend created a deprivation index.

From an initial list of 60 items he selected 12 that are key indicators of deprivation.

A few include: A weeks holiday away from home, not having fresh meat at least four times a week, for children not having a party on their last birthday and not having a cooked breakfast most days of the week.

He concluded that 22.9% of population lived in poverty whereas the state figures set the level of those in poverty at 6.1%.

These items off the list would certainly effect the conclusion of poverty in society, as it appears everyone is in poverty. This would lead to a rise in unreliable poverty statistics due to individuals relaying on this list.

Criticism of this is that the list does not take into account individual preferences. For example, every vegetarian is poor, as they would not have meat at least four times a week, which would conclude that poverty on this level is far from accurate.

Furthermore, Townsend's definition of relative poverty has come under criticisms from David Piachaud(81) who argued that the index on the Townsend Statistics were based was inadequate. (This might reflect cultural and social differences rather than deprivation).

As with Sen (1985), he argued that his research measures inequality rather than poverty.

Moreover, Wedderburn(1974), argued that his choice of indicators is arbitrary and subjective, reflecting Townsend's values.

J.Mack and S. Lansley (1983) Breadline Britain, their research attempted to address the above criticisms of relative definitions.

They wanted to distinguish between: lifestyles people could not afford, e.g. Lack of money to go dancing and lifestyles they chose to follow, e.g. Those who have the money, although they choose and prefer to sit in and watch telly.

The aim of their survey was to determine what the general public considered a necessity, and by 'doing without' reflected choice or necessity.

However, with qualifications, the list may still be valid as measure of a certain standard of normality, and the exclusion from normality because of poverty. Effectively, Townsend’s list says that a bad social life is an indicator of poverty also.

Prior to the 1997 Labour government the term 'social exclusion' was rarely, if ever, used when discussing social policy in the UK. Rather the word 'poverty' was often used as an all- encompassing term to describe situations where people lack many of opportunities that are available to the average citizen. Whist low income was central to this notion; it also covered other factors relating to severe and chronic disadvantages.

Without relative poverty most individuals in poverty would go unnoticed as ones conclusion towards poverty would be that of the third world countries that are defined through the absolute definition where individuals have no means of shelter, clean water and food. This definition may exist in those countries but due to their lack of materials and economic system relative poverty doesn't exist. Unlike the richer and materialistic countries, where absolute poverty has gone, leaving relative poverty at a high. For instance; M. Thatcher argued that absolute, poverty has been virtually eradicated, stating; “the fact remains that people are fully and properly provided for” M.Thatcher House of Commons 22.12.88.

Moreover this lead to identifying groups that also struggle to maintain the strain of poverty, e.g. social exclusion.

According to British government in 2004/5 figures showed that 22% of households that contained 1 or more adults disabled were in poverty, compared to 14% of households with no disabled adults.

Oppenheim and Harker(96) claimed that high rate of poverty among disabled are partly a result of labour market exclusion and marginalisation.

According to Adcock (97) disable people suffer from social exclusion as well as material poverty.

This seen the introduction of the Disability Discrimination Act (2005), strengthening the laws against discrimination.

In the European Union poverty and social exclusion has risen despite programmes to resolve it.

Critics of the Conservative government argue that from 1979 government policies have increased the gap between rich and poor. Whereas the Labour party introduced the working tax credit to help low earners to level out the gap a little.

United States of America has a very high level of relative poverty and in 1993: 39.3 million men, women and children, 15.1% of the population were officially living in poverty. Another 12.5 million people- marginally poor. Strong Economic growth has resulted in a wider gap in income inequality and an increase in relative poverty, which will continue due to the constant income rise in  U.S.

These statistics change our conclusion of poverty, and shows that without relative poverty many countries like America would suffer due to the absolute poverty line which portrays only poor countries suffer poverty. Although overall world poverty is decreasing and between 1970-2006, the global poverty rate has been cut by nearly three quarters. World population living on $1 a day went from 26.8% in 1970 to 5.4 in 2006.

It seen a fall of 86% in South Asia, 73% in Latin America, 39% of the middle east and 20% in Africa. This proves the decrease in absolute poverty in developed countries, and mainly only exists in undeveloped one like Africa.

Looking at the overall picture this essay suggests that both definitions to poverty have played a big role in society and helped it find ways to reduce poverty.

Although both definitions may have their faults that certainly change your conclusion to poverty and play big role in society.

For instance, poverty must include some element of absolute poverty, especially when discussing poverty in the third world.

Also comparing relative poverty levels between different countries does not sufficiently take into account the differences in standards of living. In reality it is more a measure of inequality. For example, an individual who is relatively poor in a rich country usually suffers less material deprivation than those living in a country which has low overall living standards. These countries poverty would be concluded as more extreme, with lack of basic necessities and survival can be more of a struggle, although because the general living standards are lower in these countries, there may be less relative poverty i.e. minimal differences between poor and the living standards of everyone else. This can lead to confusion around how the extent of poverty and run the risk of underplaying the severity of the poverty suffered by some groups.