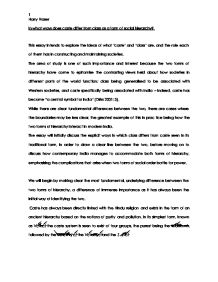 In what ways does caste differ from class as a form of social hierarchy?

In what ways does caste differ from class as a form of social hierarchy? This essay intends to explore the ideas of what 'caste' and 'class' are, and the role each of them has in constructing and maintaining societies. The area of study is one of such importance and interest because the two forms of hierarchy have come to epitomise the contrasting views held about how societies in different parts of the world function; class being generalised to be associated with Western societies, and caste specifically being associated with India - indeed, caste has become "a central symbol for India" (Dirks 2001: 3). While there are clear fundamental differences between the two, there are cases where the boundaries may be less clear, the greatest example of this in practice being how the two forms of hierarchy interact in modern India. The essay will initially discuss the explicit ways in which class differs from caste seen in its traditional form, in order to draw a clear line between the two, before moving on to discuss how contemporary India manages to accommodate both forms of hierarchy, emphasising the complications that arise when two forms of social order battle for power. We will begin by making clear the most fundamental, underlying difference between the two forms of hierarchy, a difference of immense importance as it has always been the initial way of identifying the two. ...read more.

This highly restricts individuals, and can be linked to the fact that he "has certain obligations to the group of which he is a member by birth" (Beteille 1996: 160). This stresses the importance of interdependence in caste based societies, the idea that the well being of the family unit is of greater importance than the individuals need. Such a view directly contrasts that of modern class societies, which emphasise the significance of independence, personal achievement, striving to be the best one can be regardless of any family issues. According to Dumont, "the ideal of liberty and equality follows immediately from [this] conception of man as an individual" (1970: 11). This ideal is indeed one of the key ways class has been distinguished from caste, caste being labelled with 'inequality' and 'hierarchy' while class claiming to promote equality. The labels given to caste are hard to deny however arguably in many cases they apply to class too. It is true that class hierarchies give the opportunity for equal chances for all in some situations, however in some this is far from the case, a well discussed example in modern society being Oxford University's conspicuous favouring of student from an elite public school background.1 Therefore it seems the distinction between the two here is the way they are portrayed in popular culture, caste being viewed, in general accurately, as a system of inequality, while class being viewed, more inaccurately, as a system that emphasises equality. ...read more.

How can one get away with such a self-contradictory view? Quite easily, simply by exploiting the very ways in which caste and class differ. Fuller explains that in order to hide from the true reasoning behind such a view: that of preventing the undermining of a purity based hierarchy; the man in question would turn to class and cultural based differences to defend his view, such as a different "rahan-sahan (way of life)" (Fuller 1996: 12). So in turning to distinctions of class, a more acceptable social hierarchy to caste in modern India, the man has ironically acted to preserve one of the few remaining caste rituals in the country. It is however important to remember that while endogamy may still exist, intercaste marriages are becoming more and more common, and at least in urban India, the taboo that accompanies it is fading. In conclusion, when taken in its traditional form, caste clearly contrasts class as a form of social hierarchy in a large number of ways, including marital practices, the importance of hereditary values, opportunities of achievement and conceptions of equality. In contemporary India, where the two exist side by side, these differences can blur into one another; causing contradictions and confusion in the workings of social stratification. Ultimately though, such confusion can be broken down and explained by the fundamental differences between the two forms of hierarchy - as it is because of these differences that any confusion could ever arise in the first place. ...read more.