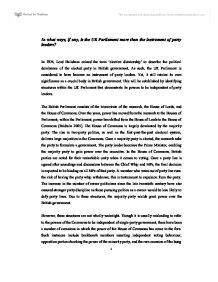 In what ways, if any, is the UK Parliament more than the instrument of party leaders?

In what ways, if any, is the UK Parliament more than the instrument of party leaders? In 1976, Lord Hailsham coined the term 'elective dictatorship' to describe the political dominance of the elected party in British government. As such, the UK Parliament is considered to have become an instrument of party leaders. Yet, it still retains its own significance as a crucial body in British government. This will be established by identifying structures within the UK Parliament that demonstrate its powers to be independent of party leaders. The British Parliament consists of the triumvirate of the monarch, the House of Lords, and the House of Commons. Over the years, power has moved from the monarch to the Houses of Parliament; within the Parliament, power has shifted from the House of Lords to the House of Commons (Baldwin 2005). The House of Commons is largely dominated by the majority party. The rise in two-party politics, as well as the first-past-the-post electoral system, delivers large majorities in the Commons. Once a majority party is elected, the monarch asks the party to formulate a government. ...read more.

On 8 March 1979, at the end of a confidence debate following the so-called winter of discontent, enough of the opposition parties united to defeat the majority Labour government by 311 votes to 310. The Conservative motion carried by one vote precipitated the May 1979 general election and brought the Conservative Thatcher administration to power. The opposition parties have a number of additional resources and functions that can be used to influence the Commons. Each year, 20 days in the House of Commons are assigned opposition days: on 17 of these days, the motion is chosen by the main opposition party and on the other 3 days, the motion is chosen by the third largest party. In addition, the opposition can also persuade the Speaker to grant an adjournment debate on urgent issues. It is also traditional for an opposition MP to chair the influential Public Accounts Committee. With these resources, the opposition also provides a check on the elective dictatorship that might otherwise be rampant in the Commons. Rejection by the House of Lords The Commons is often the focus of interest on major occasions - a Budget Statement, a motion of censure on a minister or the government, an emergency, or the decision to go to war. ...read more.

will be close, the Executive instead of being so arrogant will have to be nice, to listen, to keep everyone on board, and that will change the atmosphere all to the good. Some proper democracy will come back into the Commons and we need it badly." More than an Instrument of Party Leaders The Parliament is inevitably led by the majority party and its party leaders. Yet, on the important issues, the mechanisms in the Parliament react in the form of backbench rebellions, dissent by the opposition parties, and obstruction by the House of Lords. In some rare instances, a hung parliament occurs, signalling the need for party leaders of different parties to reconcile differences and coordinate decisions to best serve the interests of a larger portion of the British public. Elective dictatorship is an inaccurate term to describe the UK Parliament. A dictatorship is not checked by other powers. Yet, in the UK Parliament, the party leaders are subject to constant scrutiny. Without the support of his own party, tacit approval by the opposition, consent by the Lords, and confidence of the public, the party leader is powerless. The UK Parliament is much more than an instrument of party leaders. ...read more.