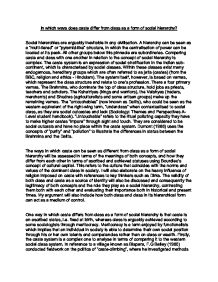 In which ways does caste differ from class as a form of social hierarchy?

In which ways does caste differ from class as a form of social hierarchy? Social hierarchies are arguably inevitable in any civilisation. A hierarchy can be seen as a "multi-tiered" or "pyramid-like" structure, in which the centralisation of power can be located at its peak. All other groups below this pinnacle are subordinates. Comparing caste and class with one another in relation to the concept of social hierarchy is complex. The caste system is an expression of social stratification in the Indian sub-continent, which is characterised by social classes. Within these classes exist many endogamous, hereditary groups which are often referred to as jatis (castes) (from the BBC, religion and ethics - Hinduism). The system itself, however, is based on varnas, which represent the class structure and relate to one's profession. There a four primary varnas. The Brahmins, who dominate the top of class structure, hold jobs as priests, teachers and scholars. The Kshatriyas (kings and warriors), the Vaishyas (traders, merchants) and Shudras (agriculturalists and some artisan groups) make up the remaining varnas. The "untouchables" (now known as Dalits), who could be seen as the western equivalent of the right-wing term, "underclass" when contextualised to social class, as they are social outcastes and lack (Sociology: Themes and Perspectives A-Level student handbook). ...read more.

By this meaning that religious requirements translate into those of one's caste membership. This can be supported by Weber, who believes that the social identity of a Hindu is caste according to the ritual duties and rights it gives and imposes on the individual. In his view, caste makes up a fundamental institution of Hinduism. Social class, in essence, is a free-standing institution on its own and is independent of any other agencies to complete it. In other words, social class is not determined by religion in my opinion. The caste system can also be seen as a control mechanism which ensured a maintained hierarchy in pre-colonial India. According to Abb� Dubois, caste is "the only reason why Hindus did not fall into the same state of barbism as their neighbours" (from Dirks, Castes of Mind, p. 56). By this it is meant that caste acted as a means of securing authority among different peoples in a state which had yet to be conquered by the west. He implies that, comparatively, this system was advanced for its time and worked well in avoiding conflict and gross civil war which were taking place in other parts of the world. As Dubois was a European writing about civilisation during a period of colonialism, one could imply that a reason for his view being such was because the caste system divided society, thus meaning that the west did not have to. ...read more.

I tend to agree with Beteille's view on caste of it having lost legitimacy in present-day times. This can be seen as the case with class as one could argue it simply lacks the significance it once had in determining one's social position within society. Although class prejudices still exist in society, they are less informed and do not permeate specific aspects of society such as caste does, which can be seen through the importance still placed on same-caste marriages in the Indian sub-continent. Social class boundaries have also deteriorated drastically and it is hard to define what class is, as one's norms and values could adhere to one culture but lack of economic capital may disregard what that individual's perception of what their own class is. Taking into consideration this point, Beteille's analysis of the caste system also acknowledges that social shifts (e.g. urbanisation) within society are taking place, resulting in the system being modified. It no longer remains an "eternal institution" which Beteille sees as the primary faults of anthropologists. It is thus difficult to contrast these two concepts in terms of which is more significant as a form of social hierarchy. It could be drawn that people generally from a lower class or caste suffer the burden of an inferior socio-economic status more so and thus it is a disadvantage. ...read more.