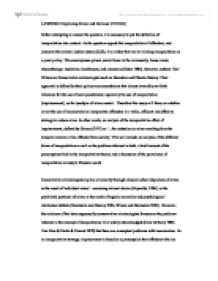 'Incapacitation is an effective way to reduce crime.' Discuss

Before attempting to answer the question, it is necessary to put the definition of incapacitation into context. As the question regards the incapacitation of offenders, and concerns the criminal justice system (CJS), it is evident that we are viewing incapacitation as a penal policy. This encompasses prison, surveillance in the community, house arrest, chemotherapy, mutilation, banishment, and execution (Gabor 1985). However, authors 'like' Wilson are Conservative criminologists such as Hernstein and Charles Murray. Their approach is defined by their policy recommendations that almost invariably set forth rationales for the use of more punishment, especially the use of incapacitation (imprisonment), as the lynchpin of crime control. Therefore this essay will focus on whether or not the use of incarceration to incapacitate offenders is a viable, efficient and effective strategy to reduce crime. In other words, an analysis of the incapacitative effect of imprisonment, defined by Greene (1977) as '...the reduction in crime resulting from the temporal removal of an offender from society.' This will include an analysis of the different forms of incapacitation as well as the problems inherent in both, a brief account of the presumptions held in the incapacitative theory, and a discussion of the prevalence of incapacitation in today's Western world. Conservative criminologists explain criminality through classical school depictions of crime as the result of individual actors'- exercising rational choice (Reynolds, 1996), or the positivistic portrayal of crime as the result of organic anomalies and psychological/ intellectual defects (Herrnstein and Murray 1994; Wilson and Herrnstein 1985). However, the criticism of the ideas espoused by conservative criminologists focuses on the problems inherent in the concept of incapacitation. It is widely acknowledged (Clear & Barry 1983; Van Dine & Dinitz & Conrad 1979) that there are conceptual problems with incarceration. As an incapacitative strategy, imprisonment is based on a presumption that offenders who are imprisoned would have continued to commit crimes if they had remained free. ...read more.

Furthermore, by treating these factors as 'things', to use Emile Durkheim's term, they are treated as 'objective factors' in a predictive scheme stripped of moral content. Furthermore, some methods of prediction consider arrests and charges. Research indicates that ethnic minority groups are more likely to be stopped and searched, arrested and charged than other groups, supporting the claim that SI could victimise ethnic minority groups (Gabor 1985). Under SI, two people who commit the same crime may get very different sentences, which violates the legal requirement that all have an equal standing before the law. The use of prediction instruments is often justified on the basis they are at least better than chance (Wright, 1994, p.126), which overlooks how in court a series of considerations negotiate to come to a final result. Using instruments alters the negotiating enterprise in court in the direction of considerations of possible future crimes, which contradicts with the principles of a civilised legal system. Additionally, the requirement of most legal systems that the offence needs to be proven beyond all reasonable doubt cannot be ratified with the poor accuracy of prediction, which is by no means beyond doubt, in any case. Some feel a small sacrifice of justice does not stop incapacitation being a viable and effective method of reducing crime, so long as it favours the greater aggregate social benefit. One argument being that high rate offenders are convicted seldom, in relation to the high amount of crimes they commit; and therefore sentencing by SI can be seen as a way to redress this imbalance. Others believe that the criteria for prediction coincide with the criteria for a 'just deserts' rationale. Hirsch (1984) counters this claim, contending that the criteria for prediction and for 'desert' differ significantly in the degree of emphasis placed on prior criminal history. Hirsch (1984) also criticises the argument that desert furnishes the outer limits on punishment, within which predictive determinations may be used. ...read more.