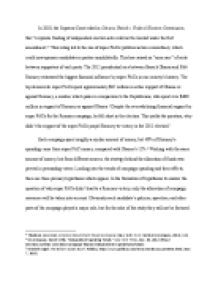 ﻿In 2010, the Supreme Court ruled in Citizens United v. Federal Election Commission, that ?corporate funding of independent election ads could not be limited under the first amendment.[1]? This ruling led to the rise of super PACs (political action committees), which could now sponsor candidates or parties uninhibitedly. This has caused an ?arms race? of sorts between supporters of each party. The 2012 presidential race between Barack Obama and Mitt Romney witnessed the biggest financial influence by super PACs in our country?s history. The top democratic super PACs spent approximately $87 million in either support of Obama or against Romney, a number which pales in comparison to the Republicans, who spent over $400 million in support of Romney or against Obama.[2] Despite the overwhelming financial support by super PACs for the Romney campaign, he fell short in the election. This yields the question, why didn?t the support of the super PACs propel Romney to victory in the 2012 election? Each campaign spent roughly a similar amount of money, but 40% of Romney?s spending came from super PAC money, compared with Obama?s 12%.[3] Working with the same amount of money, but from different sources, the strategy behind the allocation of funds was pivotal in persuading voters. Looking into the trends of campaign spending and their effects, there are three primary hypotheses which appear. ...read more.

This number is equal to that of the percentage of voters who decided in September and the number who decided within the last few days prior to the election, and 2% less than the amount of voters who decided in October. In addition, while Obama held 7% more of the voters who decided before September, he also held 7% more of the voters who decided on the last day. The conclusion of this data is that Romney?s 6 week hiatus from advertising due to his spending during the primaries was not significant to his loss in the election. The second hypothesis, questioning the advertising strategy of the super PACs supporting Romney, is better supported by the data. Political action committees as a whole spent $290.9 million in advertisements which opposed Obama, compared to $57.6 million on advertisements which supported Romney.[11] Referring again to the exit polls, it is shown that the negative advertising may not be very effective. Only 10% of voters described their vote as being placed because they dislike the other candidates, compared to the 88% of voters who either strongly favored or liked their choice for president. In the largest demographic, those who strongly favored their candidate, Obama won 9% more votes than Romney did.[12] In addition, the Obama campaign ran 15,000 more ads in swing states than the Romney campaign.[13] The decision to essentially waste a bulk of their resources on negative ads while losing ground in advertising in the most crucial election states gives merit to the hypothesis questioning the super PACs strategies. ...read more.