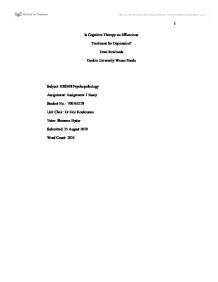 Is Cognitive Therapy an Efficacious Treatment for Depression?

Is Cognitive Therapy an Efficacious Treatment for Depression? Tesni Rowlands Deakin University Waurn Ponds Subject: HPS308 Psychopathology Assignment: Assignment 1 Essay Student No.: 700165229 Unit Chair: Dr Eric Koukounas Tutor: Shannon Hyder Submitted: 25 August 2010 Word Count: 2016 Is Cognitive Therapy an Efficacious Treatment for Depression? Introduction Major depressive disorder, better known as clinical depression, is a mental disorder which is characterized by symptoms such as feelings of worthlessness, loss of sleep, loss of interest and an inability to experience pleasure for a period lasting longer than two weeks (Barlow & Durand, 2005). Traditionally, depression was treated using antidepressant medication (ADM) and was seen as the most standard treatment for severe depression (Dimidjian, Hollon, Dobson, Schmaling, et al., 2006). However, ADM was not useful for all forms of depression, with some patients refusing to take medication due to the harmful side effects. Therefore, psychotherapy techniques, such as cognitive behavioural therapy (CBT) and interpersonal psychotherapy (IPT) became increasingly popular for the treatment of depression and were given a high level of credibility. The way in which CBT was used to treat depression was to identify and alter negative thinking styles and replaced them with positive beliefs and attitudes. ...read more.

However, they have over-looked any evidence that suggests that CBT works equally as well as ADM. Finally, Klein suggests that all studies which test CBT and ADM should include a placebo-pill control group to ensure that each treatment is correctly implemented. Without this control group, findings become debatable due to the uncertainty of ADM being correctly implemented in the absence of drug-placebo differences. Therefore, these aspects should be considered before interpreting results of experiments determining the efficaciousness of CBT and depression. Although earlier research suggested that CBT was not as effective as ADM in the treatment of depression, more recent research suggests that it can perform as well as antidepressants in treating patients with moderate to severe depression (Jacobson & Dobson, 1996). DeRubeis, Hollon, Amsterdam, Shelton, et al., (2005) compared the efficacy of ADM with CBT in a placebo-controlled trial, finding that CBT was as effective as medications for the initial treatment of moderate to severe major depression. However, this degree of effectiveness was dependant on various factors, including a high level of therapist experience or expertise. Similarly, Parker, Roy, & Eyers (2003) supported the theory that the effectiveness of CBT has been linked to therapist's characteristics, including their capacity to structure the treatment and empathy levels. ...read more.

Alternatively, conflicting research has found that there is no difference between relapse rates between CBT and ADM in the long term outcome, suggesting that ultimately, there is no difference in effectiveness between the treatments (Jacobson & Hollon,1996). Conclusion When summarising all available information regarding the effectiveness of CBT in treating depression, results indicate that CBT is no more effective for treating depression than ADM. When comparing CBT with other forms of treatment, such as IBT and ADM, CBT was either less effective or equally effective, but was never a superior form of treatment. However, CBT was found to be superior to non-directive supportive therapy. Furthermore, not all components were found to be necessary when treating depression, with the behavioural aspects being the most predominantly important aspects of CBT. Not necessarily all who suffer from depression will benefit from CBT, however it is still seen as a form of treatment which should be implemented. Reasons for this include evidence that supports that CBT has a low level of relapse over a short period of time. However, it has been shown that over an extended period, relapse in CBT is not more effective that AMD. Therefore, it can be concluded that although CBT is not as effective as once thought, it should still be considered with a combination of medication when treating depression. ...read more.