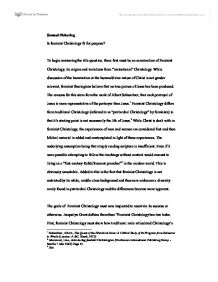 Is feminist Christology fit for purpose?

Samuel Pickering Is feminist Christology fit for purpose? To begin answering the title question, there first must be an examination of Feminist Christology, its origins and variations from "mainstream" Christology. While discussion of the Incarnation or the human/divine nature of Christ is not gender relevant, feminist theologians believe that no true picture of Jesus has been produced. The reasons for this stem from the work of Albert Schweitzer, that each portrayal of Jesus is more representative of the portrayer than Jesus.1 Feminist Christology differs from traditional Christology (referred to as "patriarchal Christology" by feminists) in that it's starting point is not necessarily the life of Jesus.2 While Christ is dealt with in feminist Christology, the experiences of men and women are considered first and then biblical material is added and contemplated in light of these experiences. The underlying assumption being that simply reading scripture is insufficient. Even if it were possible attempting to follow the teachings without context would amount to living as a "first century Rabbi/itinerant preacher"3 in the modern world. This is obviously unsuitable. Added to this is the fact that feminist Christology is not restricted by its white, middle class background and thus now embraces a diversity rarely found in patriarchal Christology and the differences become more apparent. The goals of Feminist Christology must now inspected to ascertain its success or otherwise. Jacquelyn Grant defines them thus "Feminist Christology has two tasks. First, feminist Christology must show how traditional male articulated Christology's have been used "to keep women in their place" rather than to save women. ...read more.

Elisabeth Sch�ssler Fiorenza has a markedly different approach to the first of Jacquelyn Grant's tasks. Rather than attempting to construct revolutionary post-patriarchal Christology, she explores existing theoretical frameworks and the role Theology, particularly Christology, has in preventing the oppression of women.21 Her linking of patriarchal Christology with modern, right wing thought regarding "traditional" gender roles and the role of women, is a useful means of demonstrating the "real world" impact of patriarchal Christology. In particular, Fiorenza links the far rights interchangeable usage of divine power and masculine power, is relevant to the title question. Specifically, Fiorenza claims that "The political-religious right claims the power to name and define the true nature of biblical religions against liberation theologies of all colors and geographical locations. Its well financed think tanks are supported by reactionary political and financial institutions that seek to defend kyriarchal capitalism".22 Fiorenza therefore claims that women must not allow patriarchal theologians sole authority to define Christology through religious texts and must consistently use the language of both the intellectual fathers of theology as well as contemporary feminists.23 The use of the term kyriarchy by Fiorenza is a departure from more hard line feminist theologians, in that it broadens the category of those oppressed to include race, class and financially based prejudice and also accounts for scenario's in which women are the oppressors. Fiorenza justifies this by claiming that "the hermeneutical center of a critical feminist theology of liberation cannot simply be women".24 While this distinction may be unpalatable for more radical feminist theologians, its implications are no less far reaching. ...read more.

Christa is no one among us and never will be. She is no one child, woman or man. She is no one earthcreature, seacreature or skycreature."34 This cleverly counters accusations of idolatry and also removes Christa from any assumption that it is any way linked to the historical Jesus. Thus Christa, becomes a true part of feminist Christology, untainted by patriarchal Christological symbology. When assessing the success of Feminist Christology's second task, to provide images for the liberation of women by way of the liberation of Jesus from oppressive and distorted interpretations, it is again, an incomplete success. While, the likes of Christa can be seen as successfully providing new Christological images by avoiding any pretence of being based upon the historical figure of Jesus, they are open to criticisms of idolatry and more significantly can be misinterpreted to still be oppressive. For example Christa's supposed glorification of women's suffering. Likewise, attempts to rework existing images again stumbles upon the issues of language and cohesion. In conclusion, Feminist Christology, while imperfect, has made progress in advancing its aims. It suffers from a lack of cohesion among its contributors. The lack of agreement over kyriarchy's role within feminism for example, leaves the area open to excessive divisiveness. In addition, the use of language must be very carefully examined. It will remain extremely difficult for feminist theologians to make their points effectively if there is a constant risk that they are working against themselves by promoting patriarchal symbolism. Work has been done in reclaiming such symbolism but it is as yet, incomplete. In short, Feminist Christology is relatively young and though imperfect, it is as valid an area of study as any other. ...read more.