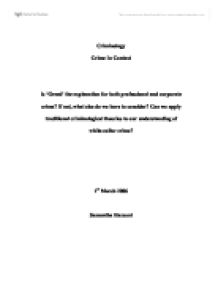 Is &quot;greed&quot; the explanation for both professional and corporate crime? If not, what else do we have to consider? Can we apply traditional criminological theories to our understanding of white-collar crime?

Sutherland explained that this is when deviants and criminals learn the techniques and attitudes needed to commit the crime through interpersonal interaction with others, he fashioned the differential association theory as he was dissatisfied with the conventional explanations of crime around at the time. The theory also states that people commit white-collar crime when they are exposed to more values favourable to the commission of crime than those which favour conformity to the law, therefore influencing individuals to commit the crimes. In 2002, Maguire, Morgan and Reiner posed the question is white-collar crime influenced by the high pressures of business life and the expectations to succeed. In my opinion, the answer to this question is a definite yes because working in a business in such a ruthless environment as the corporate world puts a great deal of pressure upon an individual to be a success and whether they succeed and their reputation are vital in order to "survive" in such a world. This pressure does on occasions become too much for some individuals and a minority turn to forms of white-collar crime to help relieve some of this pressure. ...read more.