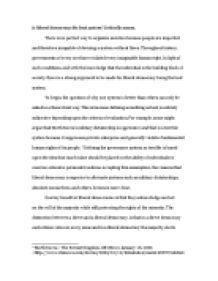 Is liberal democracy the best system?

﻿Is liberal democracy the best system? Critically assess. There is no perfect way to organize societies because people are imperfect and therefore incapable of devising a system without flaws. Throughout history, governments of every sort have violated every imaginable human right. In light of such conditions, and with the knowledge that the individual is the building block of society, there is a strong argument to be made for liberal democracy being the best system. To begin, the question of why one system is better than others can only be asked in a theoretical way. This is because defining something as best is entirely subjective depending upon the criteria of evaluation. For example, some might argue that North Korea?s military dictatorship is oppressive and that is a terrible system because it suppresses private enterprise and generally violates fundamental human rights of its people. [1] Defining the governance system as terrible is based upon the idea that much value should be placed on the ability of individuals to exercise extensive personal freedoms. Accepting this assumption, the reasons that liberal democracy is superior to alternate systems such as military dictatorships, absolute monarchies, and others, becomes more clear. ...read more.

Perhaps most importantly, a liberal democracy is constructed in such a way that the majority is unable to oppress the minority as a result of the distribution of power. For instance in the UK we have a system which separates the legislative and the executive, thereby a check on the prime minister?s power is created; the House of Commons can call a vote of no confidence at any time and the House of Lords is able to delay any laws for up to a year. Of course democracies are not immune to corruption but they promote a check and balance system and transparent governance, making them accountable to their citizens. However, citizens do not always act within their rights to demonstrate their feelings about their governments, and low voting rates are a problem for liberal democracies. [3] This may be caused by a general disillusionment with the system, a lack of concern, or inaccessibility to voting areas?despite the origin it is unsettling that in many countries citizens who are able choose not to vote. Some might argue in favor of compulsory voting, however enforcing these laws calls into question the right of the individual to withhold their vote, as well as various other logistical problems and high costs. ...read more.

However, the only alternative would be to run the risk that unfair laws are difficult to change and corrupt or incapable governments could maintain their position of power far longer than they ought. Within the restrictions and confines of our ability to interact and understand one another and what is best for society, it is far preferable to leave a lot of room to make changes and adjustments. As history has shown us, the tide of majority opinion has ebbed and flowed in ways that would shock our ancestors. Finding a balance between the individual and society that maintains optimal liberties to each is challenging, however it is of utmost importance that a working system is focused on maintaining this balance. Although liberal democracy is as susceptible to mismanagement as any other form of government, it is the best system because it holds the welfare of individuals and society above all else. ________________ [1] North Korea ? The Hermit Kingdom. CBS News. January 15, 2006 <http://www.cbsnews.com/stories/2006/01/12/60minutes/main1203973.shtml> [2] ?Political System". Federal Department of Foreign Affairs. 29 April 2011. <http://www.eda.admin.ch/eda/en/home/reps/eur/vgbr/infoch/chpoli.html> [3] ?International IDEA; Compulsory Voting?. Idea. Int. Retrieved 2011-04-26. [4] Hoppe, Hans-Hermann. Democracy: The God That Failed . Rutgers, New Jersey: Transaction Publishers, 2001. Hardcover. ...read more.