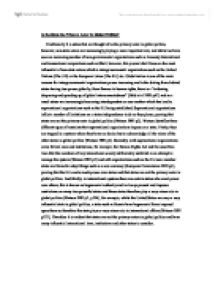 Is the State the Primary Actor in Global Politics?

Is the State the Primary Actor in Global Politics? Traditionally it is states that are thought of as the primary actor in global politics, however, non-state actors are increasingly playing a more important role, and whilst we have seen an increasing number of non-governmental organisations such as Amnesty International and transnational corporations such as Shell, however, this journal shall focus on the most influential of non-state actors which is intergovernmental organizations such as the United Nations (The UN) ...read more.

Supranational organisations inflict a number of limitations on a states independence to do as they please, proving that states are not the primary actor in global politics (Watson 1997 p2). Watson identifies three different types of restraints that supranational organizations impose on a state. Firstly, they are trapped in a system where they have no choice but to acknowledge all the views of the other states in global politics (Watson 1997 p2). Secondly, with supranational organizations come formal rules and institutions, for example, the Human Rights Act and the unwritten laws that the members of any international society deliberately establish in an attempt to manage the system (Watson 1997 p2) ...read more.

And thirdly, in international systems there are certain states who exert power over others, this is known as hegemonial authority and is always present and imposes restrictions on many less powerful states and these states therefore play a very minor role in global politics (Watson 1997 p2, p126), for example, whilst the United States are very a very influential state in global politics, a state such as Bosnia have hegemonial force imposed upon them so therefore this state plays a very minor role in international affairs (Watson 1997 p127). Therefore it is evident that states are not the primary actors in global politics and have many influential international laws, institutions and other states to consider. ...read more.