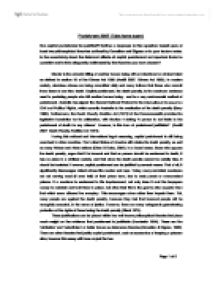 Is the uncertainty about the deterrent effects of capital punishment an important factor to consider and is this adequately addressed by the theories you have chosen?

Punishment 2007 (Take home exam) Can capital punishment be justified? Outline a response to this question based upon at least two philosophical theories outlined by Cavadino and Dignan or in your lecture notes. Is the uncertainty about the deterrent effects of capital punishment an important factor to consider and is this adequately addressed by the theories you have chosen? Murder is the unlawful killing of another human being with an intentional or criminal intent as defined in section 18 of the Crimes Act 1900 (Austlii 2007: Crimes Act 1900). In modern society, atrocious crimes are being committed daily and many believe that those who commit them deserve one fate: death. Capital punishment, the death penalty, is the maximum sentence used in punishing people who kill another human being - and is a very controversial method of punishment. Australia has signed the Second Optional Protocol to the International Covenant on Civil and Political Rights, which commits Australia to the eradication of the death penalty (Barry 1968). Furthermore, the Death Penalty Abolition Act (1973) of the Commonwealth provides the legislative foundation for its obliteration, with Section 4 stating 'A person is not liable to the punishment of death for any offence'. ...read more.

Is long term penal incarceration not deterrent enough? Some would argue absolutely no, with the suggestion that some offenders welcome prison, seeing it as a refuge from the outside wide (Cavadino et al 1992). On the other hand some would argue that capital punishment is too ruthless and a disregard to humanity. Overall both 'retribution' and 'reductivism' theories do have valid points and evidence to suggest it is justifiable to use capital punishment, but there is also challenging evidence that advocates that it is not right, nor justified to use capital punishment (Honderich 1984). How were the welfare-penal institutions that were applied to Aboriginal people different from the strategies of penal welfare applied to others? There has been a definite distinction of inequality amid the Australian Indigenous people and the white European Australian's, which dates back to 1788 when the British declared settlement (). This ill treatment of Aboriginal people inflicted by white Australia has been constant and existent throughout history and many aspects of Australian society. For example The Royal Commission into Aboriginal Deaths in Custody reported a discovery that not only was their high deaths of Aboriginal people in custody, but rather that they were simply incarcerated at much higher rates (Hogg, 2001). ...read more.