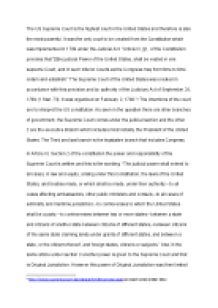 Is the US Supreme Court the most powerful branch in the Government?

ï»¿The US Supreme Court is the highest court in the United States and therefore is also the most powerful. It was the only court to be created from the Constitution which was implemented in 1789 under the Judicial Act. "Article III, §1, of the Constitution provides that "[t]he judicial Power of the United States, shall be vested in one supreme Court, and in such inferior Courts as the Congress may from time to time ordain and establish." The Supreme Court of the United States was created in accordance with this provision and by authority of the Judiciary Act of September 24, 1789 (1 Stat. 73). It was organized on February 2, 1790."[1] The intentions of the court are to interpret the US constitution. As seen in the question there are other branches of government, the Supreme Court comes under the judicial section and the other 2 are the executive Branch which includes most notably the President of the United States. The Third and last branch is the legislative branch that includes Congress. In Article III, Section 2 of the constitution the power and responsibility of the Supreme Court is written and this is the wording; “The judicial power shall extend to all cases, in law and equity, arising under this Constitution, the laws of the United States, and treaties made, or which shall be made, under their authority;--to all cases affecting ambassadors, other public ...read more.

However, this view has changed over the years from the people and the majority believe that it is too powerful rather than the weakest. The start of the U.S. Constitution is; 'We the people of the United States, in order to form a more perfect union, establish justice, insure domestic tranquillity, provide for the common defense, promote the general welfare, and secure the blessings of liberty to ourselves and our posterity, do ordain and establish this constitution for the United States of America'. The argument here is that 'we the people' don?t actually elect the judges that sit in the Supreme Court. They are only simply appointed but they are also appointed by the president that the people of the United States elect. It can be argued that it is undemocratic to not let the people pick and choose what the majority wish seeing as the Judges make massive decisions that affect the people. This is the view of Robert F. Bauer in The Washington Post "The power of Supreme Court justices today is epic in scale. The cases they hear involve the most difficult and contentious questions before the nation. An alphabetical list would begin with abortion and proceed through campaign finance, church-state relations, euthanasia, pornography, presidential selection and voting rights. And once appointed and confirmed, the members of the court who engage these momentous issues are able to do so for as long as they please."[3] The last line in the quote tells us that the Judges can be in power for life. ...read more.

Chief Justice Marshall wrote the opinion in the case, ?Marbury was entitled to the commission, the Supreme Court did not have the power to force Madison to deliver the commission. He reasoned that the Judiciary Act of 1789, the act written by Congress which authorized the Supreme Court t to issue such writs conflicted with Constitution so the law was unconstitutional. He said that when ordinary laws conflict with the constitution, they must be struck down or made ?null and void.? This is called judicial review. In effect, he wrote that the Constitution is the supreme law of the land and the courts --- especially the Supreme Court --- are the ultimate ?deciders? of what is constitutional.?[4] This was the first case that the Supreme Court said they had the right to strike down a law if they believed that is was unconstitutional. They in theory gave themselves power of Judicial Review and made the court more powerful and brought the power up to par with the Executive and Legislative branches of the government. It has been argued that the Supreme Court acts unconstitutionally itself when it exercises Judicial Review. ________________ [1] http://www.supremecourt.gov/about/briefoverview.aspx accessed 14 December 2012. [2] Donald P, Kommers, John E. Finn, Gary J. Jacobsohn, American Constitutional Law: Essays, Cases, and Comparative Notes, (3rd edn, Rowman & Littlefield Publishers, 2009) 11 [3] Robert F. Bauer, A Court Too Supreme For Our Good, The Washington Post, Washington, 2005. [4]https://shuspace.shu.ac.uk/webapps/portal/frameset.jsp?tabGroup=courses&url=%2Fwebapps%2Fblackboard%2Fcontent%2FcontentWrapper.jsp%3Fcontent_id%3D_3733448_1%26displayName%3DLinked%2BFile%26course_id%3D_263121_1%26navItem%3Dcontent%26attachment%3Dtrue%26href%3Dhttp%253A%252F%252Fwww.landmarkcases.org%252Fmarbury%252Fhome.html accessed 15 December 2012. ...read more.