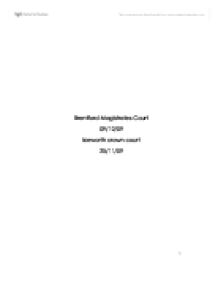 Brentford Magistrates Court 09/12/09 Isleworth crown court 25/11/09 Introduction The English Law is the legal system used in England and Wales and both use it as the basis of common law. It is applied by various members in a court hearing. As well as using common sense, the judges apply and practise their knowledge of the common law in court hearings to make a decision that will be aimed at justice being served righteously. The common law in England and Wales can be amended by the members of the Parliament. An example of this may be that the members of the parliament have changed the sentence for murder from being a death sentence to a life sentence. England is part of the European Union, the EU consists of countries who use the civil law in their legal system. As the United Kingdom is part of the European Union, the EU law also exists in the English Law. Her Majesty's Courts of Justice of England and Wales consists of a hierarchy of various courts. Below is an example of what the hierarchy of Her Majesty's Courts of Justice of England and Wales looks like: People present at a magistrates court are the 3 judges as well as the jury, their called the lay magistrates. They are 3 members of the general public who voluntarily sit in a hearing make decisions to conclude justice to the offences committed. ...read more.

The case that I observed at the crown court consisted of the defendant acting violently resulting the prosecutor to end up in hospital due to major injuries. The defendant has used a dangerous, violent weapon, a knife. Because of this he had to be tried at the crown court. Before the witness took the stand to give his testimonial evidence, he had to take an oath that he would tell the truth. The testimonial evidence can be given in various forms such as a live television link or on a pre-recorded tape. The testimonial evidence 'comprises statements of a witness made orally on oath or affirmation in court' (M. Hannibal, 2002:p7). The defendant pleaded that he was innocent of using the violent weapon but admits acting violently towards the prosecutor, he explained that he did act violently towards the prosecutor but it was only in self defence. This is what you call a mixed statement. A mixed statement is 'a statement which is partly exculpatory and partly inculpatory' (M. Hannibal, 2002:p301) This evidence is valid as he confessed out of his own will. There are some cases where the statement given is not valid as evidence, this is due to 'fear or prejudice'. An example would be that the defendant is hoping that if he does own up to the offences committed, it will limit the damages the he will face. ...read more.

All defendants that have a hearing at a magistrates court will have the opportunity to defer their case to the crown court. They can do this if they feel that they have been treated unfairly, although this could also possibly back fire as their sentence or fine could be increased by the judge of the crown court compared to a magistrate's court. I have learned that there could be various effects towards one action. I have also learned that magistrates' court and crown court both are open to public and anyone can attend them anonymously if they wanted to. I gained the knowledge that any evidence given must be relevant and admissible, it also must be seen by both parties of the court, the defendants team and the prosecutors team. I have also gained knowledge that in a magistrate's court hearing, the defendant seemed more apologetic, whereas in the crown court the defendant seemed like he did not care. This might be because the defendant may know that they would be able to plead their case and might be able to reduce the damages that he would face, whereas at the crown court it may seem like the defendant does not seem to care, this could be because the defendant may know that he may face a longer trial as well as a longer sentence. Bibliography Books * Shears, Peter, Graham Stephenson, and Philip James. James. Oxford University Press, USA, 1996. Print. * Hannibal, Martin, Lisa Mountford, British Division, British Services, and Council Bibliography. ...read more.